Report made to NORAD following Nov. 24 sighting of a light 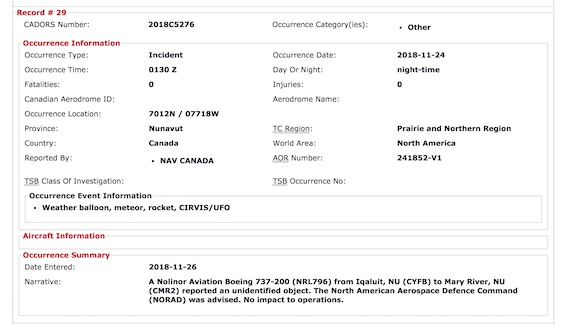 This report to Transport Canada’s Civil Aviation Daily Occurrence Reporting System describes what the pilots saw on Nov. 24 as they approached the Mary River iron mine in northern Baffin Island. (SCREEN SHOT) 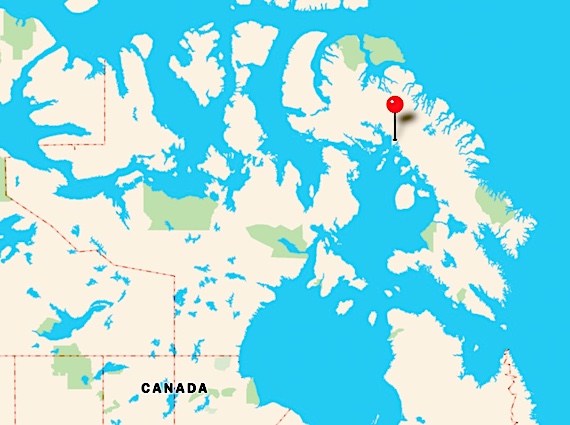 Pilots have reported the sighting of an unidentified flying object on Nov. 24, as they flew from Iqaluit to the Mary River mine in north Baffin Island.

On the CADORS report ,the unidentified flying object is referred to as CIRVIS/UFO, an abbreviation for “Communications Instructions for Reporting Vital Intelligence Sightings” for a UFO.

The CADORS report says that the North American Aerospace Defence Command, NORAD, was advised. The flight experienced “no impact to operations.”

As for what happen now to this CADORS report, Transport Canada said that “with regards to next steps when reports like these are generated, it depends on the type of the incident reported,” and that “the information… should be treated as preliminary, unsubstantiated, and subject to change.”

Marco Prud’homme, Nolinor’s vice president, said they learned Tuesday about the sighting and the CADORS report.

In speaking to the pilot, who had the day off, Prud’homme said he learned more about what was seen.

The pilot told him that he saw a shining light, which changed from red to green to white, and which may have been from a star or a meteorite, but “probably something natural,” Prud’homme suggested.

Various online sources suggest a report of a UFO can jeopardize a pilot’s career.

However, such UFO reports appear not to be that unusual: earlier this month several pilots reported seeing a “very fast” UFO above Ireland.

“It came up on our left hand side (rapidly veered) to the north, we saw a bright light and it just disappeared at a very high speed … we were just wondering. We didn’t think it was a likely collision course … [just wondering] what it could be,” said a recording of a pilot with air traffic controllers in Shannon, Ireland.

A group called Ufology Research. which has solicited UFO case data from known and active investigators and researchers in Canada, said earlier this year that 1,101 UFO sightings had been reported in Canada in 2017.

“The continued reporting of UFOs by the public and the yearly increase in numbers of UFO reports suggests a need for further examination of the phenomenon by social, medical and/or physical scientists,” the report said.

There have been reports of UFOs made from the ground in Nunavut.

On Sept. 16, 2016, in Iqaluit, a hiker said he was headed home and was looking at the northern lights “when a bunch of star-like lights moving in sequence caught my attention. Then I saw an airplane flying, and when it flew towards the lights it went out of sight until it reached the other side.

“I suddenly saw something bright flash, and I looked up then I saw it again, and it happened one more time, and I got a little nervous, so I went to call a cab and my phone started acting up, then all of a sudden it went to normal, and I finally got a cab and went home.”

Another UFO report from July 2011 includes a video taken by an Iqaluit man filming on his deck, where he had gone out to have a smoke.

“There was a blue light rotating around another stationary blue light. I ran for my camera and by the time I got back outside the ‘UFO’ was at a much higher altitude and thus the video. It stayed in the skies for almost three hours and I had at least 60 witnesses, mostly just curious but astonished and amazed individuals, one woman even freaked out and ran back inside her house,” said a text accompanying his video on YouTube.

“More lights (were) noticed underneath the hovering white light and they seemed to be retrieving something from the area and there were more lights coming out of the big hovering light,” Kowcharlie said.

He said the “speed of objects coming out of bright light (were) too fast for this world.”