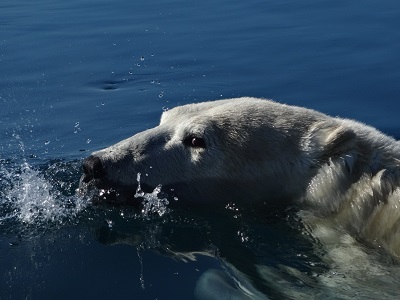 A polar bear is spotted swimming off White Island in the Kivalliq region. The Government of Nunavut says all the bears involved in a deadly attack last month were considered healthy and in good condition. (PHOTO BY J. MILORTOK)

The polar bears involved in the fatal attack on a Nunavut hunter in August were in healthy condition, say wildlife officials.

A group of three men left Naujaat by boat on Aug. 21 to hunt caribou and narwhal southeast of the community.

Later that week, while on the land along Lyon Inlet, the group was approached by a mother polar bear and her cub.

The polar bears mauled and killed Darryl Kaunak and injured two others before they were shot. Two other polar bears reportedly approached the group and were also killed.

With no GPS and poor ice conditions, the two survivors weren’t rescued until several days later, on Aug. 28.

Government of Nunavut wildlife officers have since visited the scene to investigate the attack.

They’ve analyzed the carcasses of three of the animals; a fourth polar bear was “probably killed,” but officers found no carcass at the site, the Department of Environment said in an email.

Of the destroyed polar bears, one was an adult female, another was a sub-adult female and the third was a yearling male.

All three were found to be in good condition, the department said.

All the polar bears shot at the site were considered justified kills in defence of life and property.

Naujaat’s polar bear quota for 2017-18 was 14 bears from the Foxe Basin subpopulation and five from the Gulf of Boothia subpopulation. That’s the same number of polar bears that were harvested for that period, although one was considered a defence kill.

The community’s recommended harvest for 2018-19 remains the same.

The condition of the polar bears in Lyon Inlet offers little insight into the attack that killed a man—the second fatal polar bear attack in the Kivalliq this year.

In July, Aaron Gibbons was visiting Sentry Island near Arviat when he was mauled to death by a polar bear.

The polar bear was destroyed immediately afterwards. A necropsy of the animal found it was an adult male that was skinny, but considered to be in “fair condition,” the Department of Environment said.

Wildlife officers in Arviat have since been investigating the illegal killings of four other polar bears near the community since the July attack.

No charges or fines have been laid in relation to those deaths, the department said on Sept. 5, though the investigation in ongoing.

One additional polar bear killed near Arviat this past summer was considered a defence kill.

Wildlife officers are also investigating another reported defence kill of a polar bear, which was destroyed after it was spotted disturbing cabins and fishnets outside Rankin Inlet last month.