“It is becoming untenable as a homeowner to sustain a family” 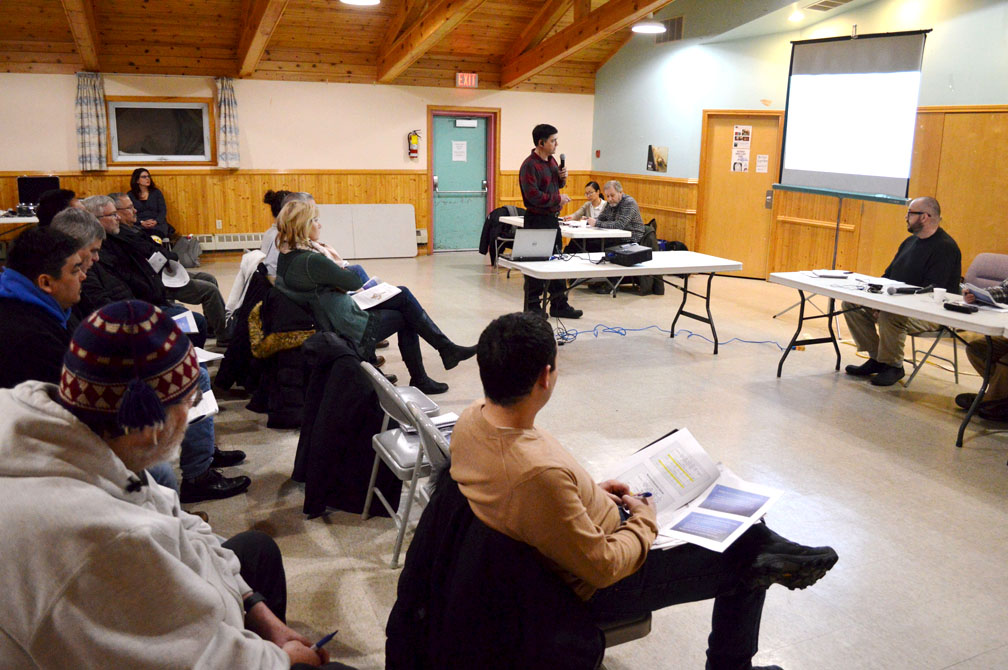 Iqaluit residents at a meeting held Jan. 11 by the Utility Rates Review Council on the Qulliq Energy Corp.’s proposed increases to electrical power rates in Nunavut. (PHOTO BY STEVE DUCHARME)

The Qulliq Energy Corp.’s proposed electricity rate hikes and its plan for a one-rate system across Nunavut were met with concern, but grudging acceptance, from the dozen or so Iqaluit residents and business owners who attended a consultation that the Utility Rates Review Council held Jan. 11.

“Iqaluit, with the lowest rates, will feel the impact more than the other communities,” the QEC president and CEO, Bruno Pereira, said during his pitch at the evening meeting.

“There’s no question about that.”

The QEC’s latest general rate application is the corporation’s first major adjustment since 2014. It proposes a 7.6 per cent across-the-board rate increase to head off a projected revenue shortfall.

The rate hike will be phased in over a two-year period, starting April 1.

But at the same time, the QEC will start the first steps toward harmonizing rates across all Nunavut communities over the next six years, to create a system where customers in each rate class pay the same rate no matter what community they’re located in.

Power rates are divided into commercial, residential and street light rates, with residential homeowners subsidized by the Government of Nunavut.

Customers in larger communities like Iqaluit and Rankin Inlet will face the biggest incremental rate hikes over the next two years, under the current proposal: increases of between 9 per cent and 12 per cent in the first year, and 8.6 per cent in the second year.

But customers in small communities like Kugaaruk and Whale Cove would see rate decreases.

“It’s just another hit. Eventually, like any business, you’ve got to find a way to hand that on to the customer,” Nimchuk said.

“There’s a big dynamic in terms of getting to a level playing field where the business side will feel more of an impact than government will in the redistribution of rates.”

That’s important in Iqaluit, where the most of the territory’s small businesses operate, along with a large proportion of Nunavut’s private homeowners, Nimchuk said.

Nimchuk called on the QEC to explore implementing non “peak hour” rates that businesses in Nunavut could use to cut costs.

Homeowner Mike Salomonie told Pereira during the consultation’s open question period, “it is becoming untenable as a homeowner to sustain a family.”

Salomonie added that the QEC should consider the number of occupants living in a home after the residence exceeds the monthly 700-kilowatt-hour ceiling for subsidy eligibility from the Government of Nunavut.

Pereira told Nunatsiaq News after the meeting that communities facing a rate increase “understand why it’s being proposed” and that “it’s been a very understanding audience.”

“Understandably, the commercial sector is concerned,” he added, but said the majority of comments on the rate increase have come from residential customers.

Beyond the scope of its rate application, attendees asked Pereira for an update on the QEC’s review of sources for alternative energy in the territory.

“We’re at everything from solar to nuclear and some of them are not going to happen in the short term,” he said.

Technology to practically harness Frobisher Bay’s tidal currents “is just not there yet,” he said.

“We don’t have that full picture yet, but we’re working towards it.”

Jeannie Ehaloak, the minister responsible for the QEC, will receive recommendations from the URRC, bring them to cabinet for discussion, and then provide instructions to the corporation.

Pereira said that if approved, it would take multiple general rate applications before energy rates in the territory are fully harmonized over six years.