Qikiqtani Truth Commission gets the Inuit story down on paper

“There’s never been that Inuit voice, that perspective to the history” 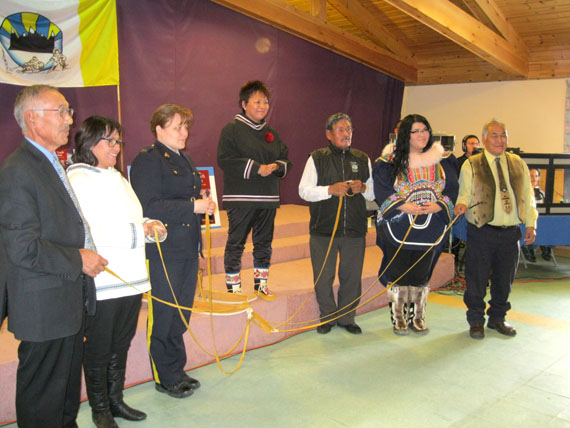 Okalik Eegeesiak, president of the Qikiqtani Inuit Association, poses for a photo with representatives of the federal and territorial governments, the RCMP, and QIA youth and elder representatives at a ceremony held during the release of a two-volume report by the Qikiqtani Truth Commission in Iqaluit, Oct. 9. (PHOTO BY PETER VARGA)

The Qikiqtani Inuit Association helped broaden the historical record of the Canadian Arctic Oct. 9, with the release of two large volumes that provide a history of Inuit life in the Qikiqtani region — otherwise known as the High Arctic and eastern Nunavut.

To most non-Inuit, the history of the Arctic peoples is usually given from the perspective of “explorers who came up from the south,” said Navarana Beveridge, executive director of the association.

“There’s never been that Inuit voice, that perspective to the history.”

The two 500-page volumes try to give that perspective.

Released in a mid-afternoon ceremony in Iqaluit Oct. 9, the books present more than six years of research, in plain language, done by the Qikiqtani Truth Commission.

They give a history of the eastern Nunavut region’s 13 communities, based on interviews and testimony with Inuit, covering the period between 1950 to 1975, when the people experienced sweeping cultural changes imposed by government.

“This is a unique work in terms of shedding light on a piece of Canadian history that’s usually never told through the eyes of Inuit at the community level, and verified through archival records,” Beveridge said at a media briefing before the ceremony.

Established by the association in 2007, the Qikiqtani Truth Commission’s work began in response to an RCMP report on the loss of Inuit sled dogs, or qimmiit, in the Qikiqtani region and Northern Quebec and after 1950.

But the inquiry grew “to include a range of issues experienced during this time” by Inuit of the Qikiqtani, according to the QIA.

The truth commission, headed by James Igloliorte, the retired Labrador judge, took testimony from many Inuit living in the Qikiqtani region’s 13 communities.

Through that process, the truth commission “recorded stories of about housing, education, healthcare, relocations, and the relationship between Inuit and government,” the QIA said in an open letter this month, prior to the release of the two books.

The commission’s work focused on the period 1950 to 1975, and concluded that the Canadian government “was the primary agent of the changes that swept the Qikiqtani region.”

After that, the commission presented a report on its findings, complete with recommendations, in Oct. 2010.

Following that release in 2010, the QIA began compiling interviews and research material into the two volumes released this week.

The recommendations call on the federal government to acknowledge responsibility for the traumatic changes to Inuit life when settled communities were established in the Arctic.

After that, the QIA seeks greater support for healing programs, such as better mental health and addiction services, and added support to improve housing and education, QIA president Okalik Eegeesiak said.

The first step, Eegeesiak said, is to set up working groups with representatives of the federal and territorial governments, Nunavut Tunngavik Inc. and the RCMP to implement the recommendations.

Representatives of both levels of government and the RCMP were on hand Oct. 9 to publicly acknowledge QIA’s work. All received copies of the reports in September, Eegeesiak said.

“We had a letter from the minister [of Aboriginal Affairs and Northern Development, Bernard Valcourt], congratulating us for the work,” Eegeesiak said after the ceremony.

“It basically said they look forward to implementing the recommendations with us.”

QIA’s implementation plan lays out 25 recommendations, grouped into four categories, which it lists as the need to “acknowledge and heal past wrongs; to strengthen Inuit governance; to strengthen Inuit culture; and to create healthy communities,” the association said in an Oct. 9 news release.

“QIA will use the implementation plan as a guiding document in shaping the work related to social policy and social delivery that is urgently required,” the release stated.

The historical information in the two volumes is a compilation of interviews with hundreds of Inuit, retired members of the RCMP and government officials, coupled with archival research and photographs.

“Education is a big part of this,” Eegeesiak said, noting that the Government of Nunavut would like to include the work in school curriculums.

“It’s available to them, and we would like to move forward with the Government of Nunavut and the federal government in developing curriculum, so that not just the Inuit learn about this but hopefully [students] across Canada,” she said.

“Now, we have community histories, we have Inuit histories in black and white,” she added. “We have all the background, we have all the research that could be worked into the curriculum.”