Denis Lamothe is the new MNA for Ungava, Nunavik’s riding 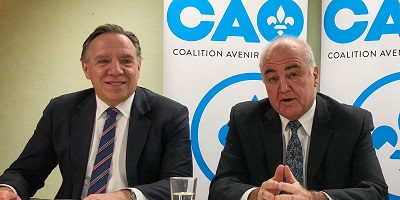 It was the first time since 1966 that Quebec voters have elected a government that wasn’t either Liberal or Parti Québécois.

A fourth party, Québec Solidaire, finished ahead of the PQ with ten seats—the party’s best win yet.

Ungava, the riding that includes Nunavik, followed suit on Oct. 1 and elected its first CAQ candidate, Denis Lamothe, a former Sûreté du Québec officer who worked for a time in Kuujjuaq and Kuujjuarapik.

The race in Quebec’s northernmost riding was by any standard a nail-biter.

Liberal MNA incumbent Jean Boucher held a healthy lead for much of the night but gradually dropped to third spot.

Lamothe won the riding with 26.5 per cent support and just 45 votes more than second-place PQ candidate Jonathan Mattson. It was unclear late on Oct. 1 whether Mattson intended to ask for a recount.

Alisha Tukkiapik, the Kuujjuaraapik-based community worker who ran for Québec Solidaire, garnered 16.5 per cent of the vote.

Legault, a former PQ minister, formed the CAQ in 2011 to bridge the gap between federalism and Quebec nationalism.

He campaigned on cutting immigration, taxes and school boards in Quebec.

The party has also pledged to start school a year earlier, at age four; to raise the legal age of marijuana use to 21 and to implement the United Nations Declaration on the Rights of Indigenous People.

The CAQ’s Denis Lamothe took a last-minute lead to win Ungava with just 45 votes ahead of second-place PQ candidate Jonathan Mattson. Outgoing Liberal MNA Jean Boucher finished in third, in what was one of Quebec’s tightest races.