“They got to know all the regulars. They treated us well. They were unbelievable” 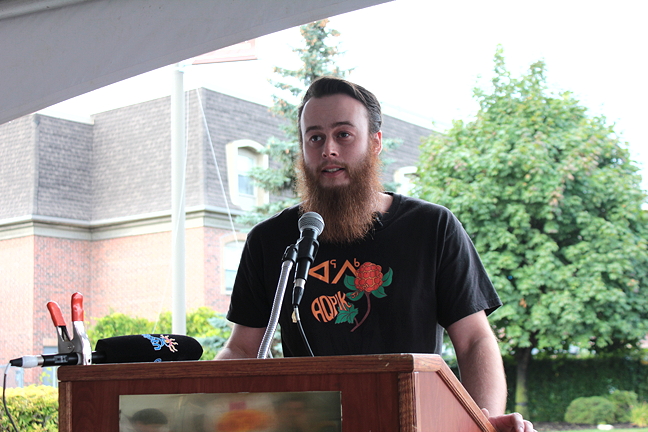 Couzyn van Heuvelen, the artist who created the qamutik sculpture, speaks at the unveiling in Ottawa Sept. 7. 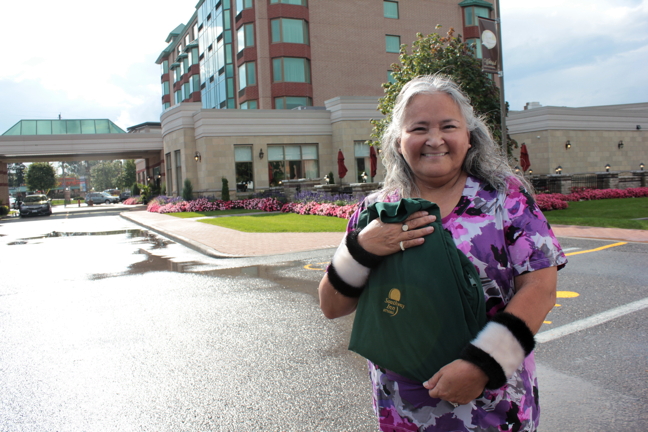 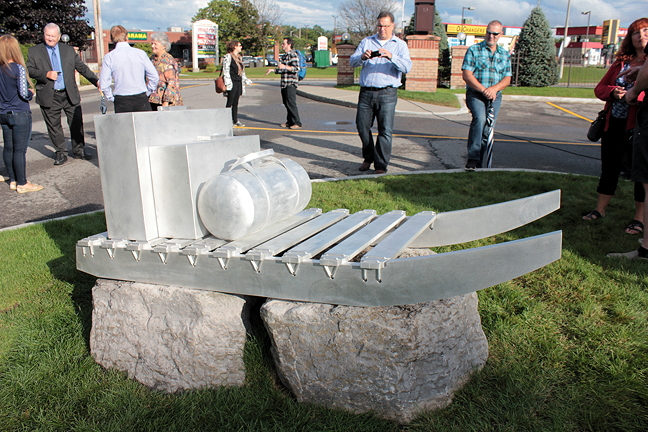 The aluminum qamutik with luggage is parked, appropriately, near the parking lot of the former Southway Inn. (PHOTOS BY LISA GREGOIRE)

OTTAWA—In a sea of big box stores and fast food joints, at the crossroads of a busy, noisy south Ottawa intersection, and tucked away on a little patch of grass beside the parking lot of a new retirement residence, is an aluminum qamutik with three suitcases on top.

It seems strangely out of place, until you hear the stories.

The sculpture commemorates the hundreds of Inuit and other northerners who came to Ottawa to shop, undergo surgery, attend appointments with specialists, relax on holiday, work, visit friends or spend the night in the city on a layover, and who stayed at what used to be the Southway Inn.

“I had this sort of imagined use, that someone just pulled up in the parking lot with all their luggage, after travelling. I thought that was an appropriate response to all the stories I’d heard,” said Iqaluit-born artist Couzyn van Heuvelen, wearing a Kuujjuaq Aqpik Jam T-shirt to the sculpture’s unveiling Sept. 7.

He said he used aluminum to withstand the elements with minimal maintenance but also because he liked how the shiny “space age” look of the qamutik contrasted with its traditional roots in Inuit culture.

The Southway, a beloved home away from home for northerners near the Ottawa airport at Bank Street and Hunt Club Road, flew the Nunavut flag for years and catered to northern guests with special check-in and check-out arrangements, last minute bookings and even room to store food in the restaurant’s freezer.

The Zlepnig family, who owned and ran the Southway for nearly 60 years, recently turned the hotel into the Waterford Retirement Residence, but not before honouring their northern guests with a special collaboration paid for through the Canada 150 fund.

The qamutik sculpture is part of the Lost Stories project, based at Concordia University in Montreal with partners across the country including Carleton University in Ottawa.

Lost Stories is honouring little known stories from Canada’s past with site specific public art. As part of the project, documentary filmmakers are hired to tell the stories on film, including the process of transforming story into art, and those films are expected to be available for viewing online by the end of 2017.

Well-known Inuk filmmaker Mosha Folger will be telling this story, “From the North to Ottawa’s Southway Inn,” and although his crew was at the Waterford residence to record the unveiling, Folger was absent for medical reasons.

But dozens of others gathered to celebrate under a tent of tables, chairs and catered refreshments in the Waterford’s parking lot.

“It was the people. They’d welcome me home,” said Sheutiapik, showing off her Southway Inn shirt and confessing she also owned a robe from the old hotel. “They got to know all the regulars. They treated us well. They were unbelievable.”

She said her partner Brian Twerdin would sometimes tease new staff, like an initiation ritual. “He’d say, ‘Where’s the piano? I’m supposed to be singing tonight!” And the older staff would just smile and go along with it.”

When asked how many times she’d stayed there, Sheutiapik said too many times to estimate, thanks to frequent stops in the capital for work, medical reasons and pleasure.

Before the sculpture was unveiled, Julie Ivalu lit the ceremonial qulliq and Samantha Kigutak-Metcalfe and Cailyn Degrandpré—the young Ottawa throatsinging duo known as Tarniriik, or Two Souls—performed several songs for an appreciative crowd.

Those responsible for the project—mostly historians from Concordia and Carleton universities—then took to the microphone to explain why this story was important and to thank everyone for making it possible, including the Zlepnig family who agreed to make space for a permanent piece of public art.

Stephen Zlepnig, who attended the ceremony, told of how his father Bill’s connection to the North began at a Nunavut trade show 25 years ago and grew into long-term friendships and frequent visits to Baffin Island.

John Walsh, a history professor at Carleton University who helped facilitate the project, said it all began with a question that formed during regular walks past the former Southway Inn—why do they fly the Nunavut flag?

“I quickly learned why there was a flag of Nunavut. It didn’t take long for me to see the testimonies and the stories. And then, when they announced the closing, the power, the voices I heard from North and from Ottawa, lamenting the closing—wishing the family well but also lamenting the passing of this place,” Walsh said in his speech.

You can read more about this project, and other Lost Stories, here. 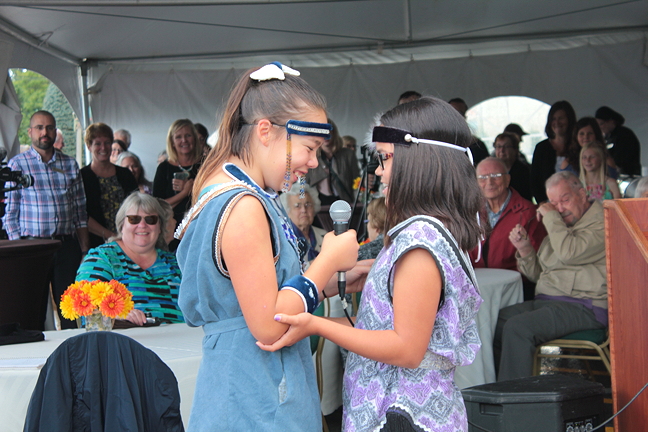 Tarniriik, an Ottawa throatsinging duo made up of Samantha Kigutak-Metcalfe and Cailyn Degrandpré, entertain the crowd gathered for the unveiling of the new qamutik sculpture in South Ottawa. The crowd enjoyed their talents, and giggles.