Nancy Columbia, Her Name in Lights 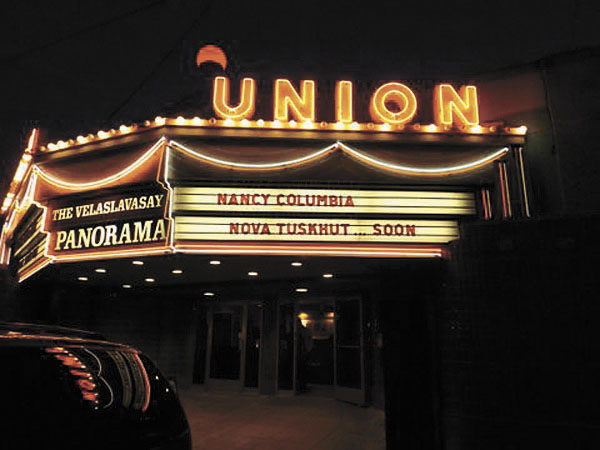 The marquee at the Velaslavasay Panorama in the Union Theatre of Los Angeles that advertises Nancy Columbia’s lost film, The Way of the Eskimo. (HARPER COLLECTION)

Nancy Columbia was the best-known Inuk of her day. Her time in the public eye lasted from her birth in 1893 to her effective retirement from show business with her marriage in 1922. Her career peaked over 100 years ago when, still in her teens, she wrote and starred in an early silent film, The Way of the Eskimo.

With this achievement, she became the first Inuk screen-writer and starring actor

The Way of the Eskimo was produced by the Selig Polyscope Company of Chicago in 1911. It was “a romance enacted on the snowfields of Labrador,” according to publicity releases. In reality, though, it was filmed in Escanaba on the shores of Lake Michigan.

The plot was simple. An Inuk hunter, Zak, (played by Zacharias Zad) saves the life of a white trapper (played by William V. Mong), only to lose his love interest (played by Nancy) to the qallunaaq when he recovers.

Eventually the trapper abandons the young lady, who prepares to end her life by tying a stone around her neck and making herself ready to throw it into a river where she will drown.

Zak arrives in the nick of time to rescue her, and she is welcomed back into the village where she and Zak become man and wife.

This was not a complicated plot, but one must bear in mind that a silent film in 1911 averaged 10 minutes in length.

Other Inuit roles were played by Nancy’s mother, Esther Enutsiak, and Simon Aputik, a distant relative and member of the travelling Inuit show-business troupe.

Nancy Columbia had appeared in at least three other silent films before The Way of the Eskimo. Ironically, she played American Indian roles in those films — The Seminole’s Sacrifice, The Witch of the Everglades, and Life on the Border — which were shot in Jacksonville, Florida.

Nancy also starred in Lost in the Arctic, also shot in Escanaba, Michigan. Other films eventually followed, in a genre that has been called “snow pictures” or “Northerns” and in the more well-known “Western” genre. Her last documented role was a small part as a Plains Indian in a 1920 release, The Last of the Mohicans.

The Way of the Eskimo and Lost in the Arctic are “lost” films. No copies are known to have survived. We know them only through release fliers, still shots and a continuity script, some of which survive in the Margaret Herrick Library of the Academy of Motion Picture Arts and Sciences, and some of which are in my personal collection of Nancy Columbia memorabilia.

Newspapers of the time carried favourable reviews of Nancy’s “Northern” movies, reviews in which she was described as “a bright intelligent young lady” and “a clever actress.”

Now, over 100 years after her movies earned the kudos of early film critics, Nancy Columbia’s name is finally back on a theatre marquee on the edge of Hollywood.

Sara is putting on an exhibition of Nancy Columbia photographs and memorabilia (together with other examples of Arctic ephemera); it opened in early May and will continue for about a year.

To launch that exhibition, Dr. Russell Potter — an expert in early film history, to mention just one of his multitude of interests — and I gave a well-attended lecture there on the part played by Nancy Columbia and her family in early silent movies.

Nancy’s name appears prominently on the outdoor marquee, a posthumous but well-deserved tribute to her work in early film.