“Such decisions may place a vessel, passengers and crew at risk” Here an elderly passenger on board the Clipper Adventurer arrives in Kugluktuk in the early hours of Aug. 19, 2010. The Transportation Safety Board report into the Aug. 27 grounding of the ship suggests that a decision to refloat the ship put passengers at risk. (FILE PHOTO) 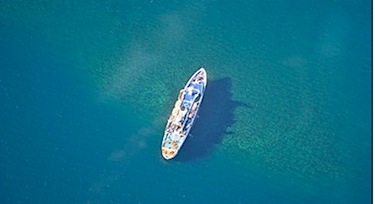 This aerial photo included into the Transportation Safety Board report into the August 2010 grounding of the Clipper Adventurer shows what the ship looked like as it was stuck on the rock in the Coronation Gulf, about 55 nautical miles east of Kugluktuk. 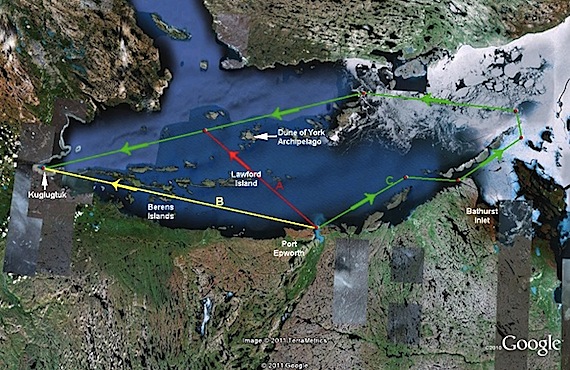 If you weren’t one of the 128 passengers plucked off the Clipper Adventurer in August 2010, count yourself lucky.

While the Transportation Safety Board’s April 26 statement on its investigation report strikes a positive note, a read of the report tells a different story.

The report shows the Clipper Adventurer lacked essential equipment and that there were serious missteps made before and after the ship grounded Aug. 27, 2010 on a charted shoal.

First, the planning practice on board the Clipper Adventurer did not fully comply with the ship management company’s own quality, safety and environmental protection program, the TSB report says, and the bridge team did not use the bridge procedures guide to evaluate their passage plan.

The TSB also found the Clipper Adventurer’s management company did not provide staff with safeguards that can help lessen the risks associated with sailing in the Arctic: there was “no serviceable forward-looking sonar” and no one ensured navigational warnings about hazards, called “NOTSHIPS,” were obtained.

“The investigation could not determine why the bridge team were not aware of NOTSHIPs, nor why they did not seek them out from the readily available sources while planning and conducting the voyage,” the report says.

That was just the beginning of the problems revealed by the report.

Heading into the Coronation Gulf, the bridge team decided to take a route that turned out to be disastrous.

The master and bridge team considered three routes from Port Epworth to Kugluktuk (shown in map above).

A second option, (B), of proceeding west between the southern shoreline of Coronation Gulf and the island using a single line of soundings was also considered.

A third alternative route (C) consisted of using a track that they had already successfully navigated northeast back to the main surveyed channel.

The bridge team elected to take the first option — which proved to be an error.

Throughout the voyage planning process, the master and ship management company were aware that the forward-looking sonar was not serviceable, the TSB notes.

But they did not use one or more of the portable echo–sounder equipped zodiacs to travel ahead of the ship, a method previously used by the ship in other unsurveyed areas in the Arctic and Antarctica, the TSB says.

The Clipper Adventurer was also moving at full speed at 13.9 knots when it slammed into the shoal, which had been previously identified and reported in a NOTSHIP.

The bridge team was using a chart from the Canadian Hydrographic Service that didn’t show the hazard, “depriving the bridge team of one source of critical information regarding the existence of a shoal on their planned route.”

And it’s up to ships to obtain information about NOTSHIPs by other means.

After the Clipper Adventurer slammed into the hard rock shoal at about 6:30 p.m. Aug. 27, the problems continued.

The crew encountered delays in telling authorities what had happened, and it took 40 minutes for passengers to get mustered into their life jackets.

At first, a Hercules aircraft was going to be sent to the ship, but when it turned out that the Clipper Adventurer was just listing and not taking on water, the Coast Guard’s Amundsen was dispatched to the rescue, finally arriving there Aug. 29 at about 1 a.m., using all its sonar equipment “to ensure its own safety,” the TSB notes.

But before the Amundsen arrived, the crew of the Clipper Adventurere decided to make an attempt to refloat their ship.

“Upon deciding to refloat the vessel after the grounding, the master did not have sufficient damage stability information to assess whether or not the vessel would be stable once off the shoal,” the report states.

The master’s knowledge of damage was limited to which tanks were flooding. But the actual condition of the hull, including the hull structure under the machinery space, “which had been damaged and significantly deflected,” was unknown.

But the master ran the main engines during the first attempt to refloat the vessel.

“During these attempts, the passenger’s shipboard routine continued as normal and, though they were kept informed, they were not re–mustered,” says the TCB.

The report states that “without readily available SAR resources, and a complete formal assessment of the vessel’s seaworthiness, including damage stability, residual hull strength and machinery condition prior to a refloat attempt, such decisions may place a vessel, passengers and crew at risk.”

Fortunately, the Clipper Adventurer remained upright and no one was injured.

While all this was going on, the bridge team did not capture video data as required by the company’s own procedures, “even though they were advised to do so by the designated person ashore following a request by the TSB.”

The video continued to record data after the grounding, overwriting the data recorded at the time of the grounding.

“When bridge recordings are not available to an investigation, this may preclude the identification and communication of safety deficiencies to advance transportation safety.”

Passengers were evacuated to Kugluktuk, the 69 crew members initially stayed on board the Clipper Adventurer while tugs tried to get the vessel off the shoal.

On Sept. 1, a dive team and a salvage company arrived on site.

The dive team discovered that the hull had sustained extensive damage and that 13 double–bottom tanks and compartments including four full diesel oil tanks were holed, as opposed to the seven originally reported by the crew.

On Sept. 14, with weather conditions again deteriorating, another attempt was made using the tugs Nunakput, Kooktook, Point Barrow and Alex Gordon, and the ship broke free from the bottom and accelerated rapidly off the shoal.

The Clipper Adventurer was towed back to Cambridge Bay. It finally headed to Greenland and then Poland where permanent repairs were completed, including replacement of the broken forward-looking sonar.

To improve safety, when a ship now first reports to NORDREG, a summary listing of all Arctic NOTSHIPs will be attached to the NORDREG clearance message.

And in 2013, Canadian Hydrographic Service will establish a procedure to update navigational charts north of 60 degrees when a hazard to navigation is discovered.

The TSB notes that until 1988, there were few cruise ships voyaging to the Arctic. From 1980 to 1987, only four Arctic voyages were conducted by one cruise ship.

However, over the past seven years, there have been a total of 105 voyages conducted by seven different cruise ships.

With approximately 105 passengers per voyage, there are now at least 1,575 cruise ship passengers in the Arctic every year.

Of 118 ships in the Canadian Arctic that conducted 284 voyages in 2011, there were 15 tankers and seven cruise ships.

“Tankers are considered to be of high risk because an accident could have severe environmental consequences. Passenger vessels are also considered high risk since, among other consequences; an emergency in the Arctic could leave passengers and crew stranded for an extended period of time in a harsh environment,” the TSB states.

Two tankers also grounded in 2010: the Woodward tanker Nanny near Gjoa Haven and the Mokami near Pangnirtung in early August.

This image from the Transportation Safety Board report into the Aug. 2010 grounding of the Clipper Adventurer shows the extensive damage suffered by the ship, shown in yellow.