“It was a feeling that we were not normal” 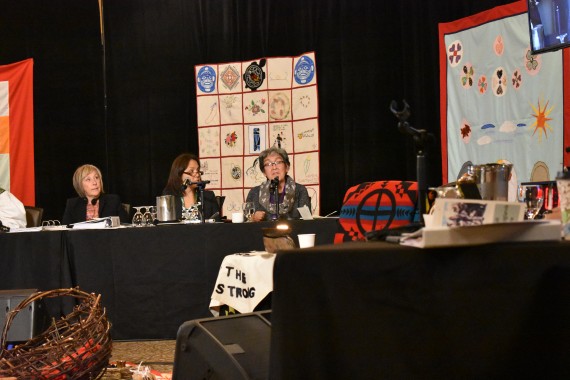 Elisapee Davidee Anigmiuq gives a tearful speech about the ways colonization in the school system in Nunavut made her take out her language frustrations on her children. She said she would not allow her children to speak English in her home because of her childhood experiences, and in her testimony at Iqaluit’s public hearing of the National Inquiry into Missing and Murdered Indigenous Women she apologized to them. (PHOTO BY COURTNEY EDGAR)

When Elisapee Davidee Anigmiuq was a child in federal day school in Iqaluit, she was told by her teachers that she was not allowed to speak Inuktitut. If she did speak her language, the teachers would hit her on the hands with a ruler or throw keys at her from across the room.

The lessons at the day schools were hard for Inuit children, she said. They would have to spell the word “orange” when they did not know what an orange was and would have to draw trees when they had never seen a tree.

Then she overheard a priest criticize her for not knowing how to make kamiks, and she felt the sting of feeling as if she was not good enough even within her own culture.

“It was a feeling that we were not normal. It was like we were wearing a sign that said, ‘Not good enough’ on our chest,” Davidee Anigmiuq said.

“We had to take on another life.”

Davidee Anigmiuq was the first witness at the National Inquiry into Missing and Murdered Indigenous Women hearing on Monday morning held at Iqaluit’s Frobisher Inn.

This week’s hearings, from today until Thursday, Sept. 13, are focused on the impacts of colonial violence on the Inuit of Nunavut.

Davidee Anigmiuq made a tearful apology to her children at the hearing about how, when they were growing up, she would scold them “in a very unhealthy way” for speaking English at home.

She said she didn’t know where that was coming from until many years later, when through her own personal inner work, she was able to finally understand that her anger was a result of the assimilation tactics she endured in her schooling.

“I was revenging,” Davidee Anigmiuq said. “It was me going against them telling me to not speak my language. It was coming from the deepest part of me that was damaged.”

There is a lot of low self-esteem and people who don’t know their identity, Davidee Anigmiuq told the commissioners, due to the day schools and residential schools in Nunavut between the 1950s and 1970s.

It is for that reason that she has been working with Tukisigiarvik, a community centre that develops cultural programs and teaches traditional skills, including kamik-making workshops, and provides Inuktitut lessons, to help promote cultural healing.

In addition to that, the community centre works with the homeless and near-homeless individuals, as well as providing resources for single women to get back on the land.

Years ago, when Davidee Anigmiuq realized that there was no support to help single women go out on the land, she started a program through the centre to help them get out in the wilderness again.

She said one woman had told her she had not taken a canoe ride since her husband had died. It was about 20 years earlier.

Davidee Anigmiuq said the programs she has developed at Tukisigiarvik have “come back full circle.”

“Hundreds and hundreds of women are learning to make kamiks through this program,” Davidee Anigmiuq said.

“It is all about lifting each other up and gaining strength through our culture.” A caribou antler and three ookpiks from Rankin Inlet lie in the middle of a handmade quilt that makes up this centrepiece at the Iqaluit hearing of the National Inquiry into Missing and Murdered Indigenous Women and Girls. Tokens on the quilt are gifts given to members of the inquiry through their travels across Turtle Island, inquiry staff member Terrellyn Fearn said. A cedar hat was gifted to the inquiry on Canada’s West Coast, and a turtle shell is from the East Coast. Participants in the inquiry can use the basket, called the Miskwaabimaag Basket, to gift their own stories—in the form of pictures, notes or tokens—to the commissioners. The basket was gifted to the inquiry by Indigenous women in Manitoba to help commissioners “gather the stories of loved ones, families and survivors of violence” a banner set up in the Frobisher Inn reads. The panels on this quilt carry messages like, “root out violence,” “you will be in our hearts forever,” and “to my sisters, there’s no sunshine when you’re gone and our world just ain’t the same.” The quilt and others like it were made through support from the Elizabeth Fry Society by women in the justice system, as well as by participants of community hearings. (PHOTO BY BETH BROWN)