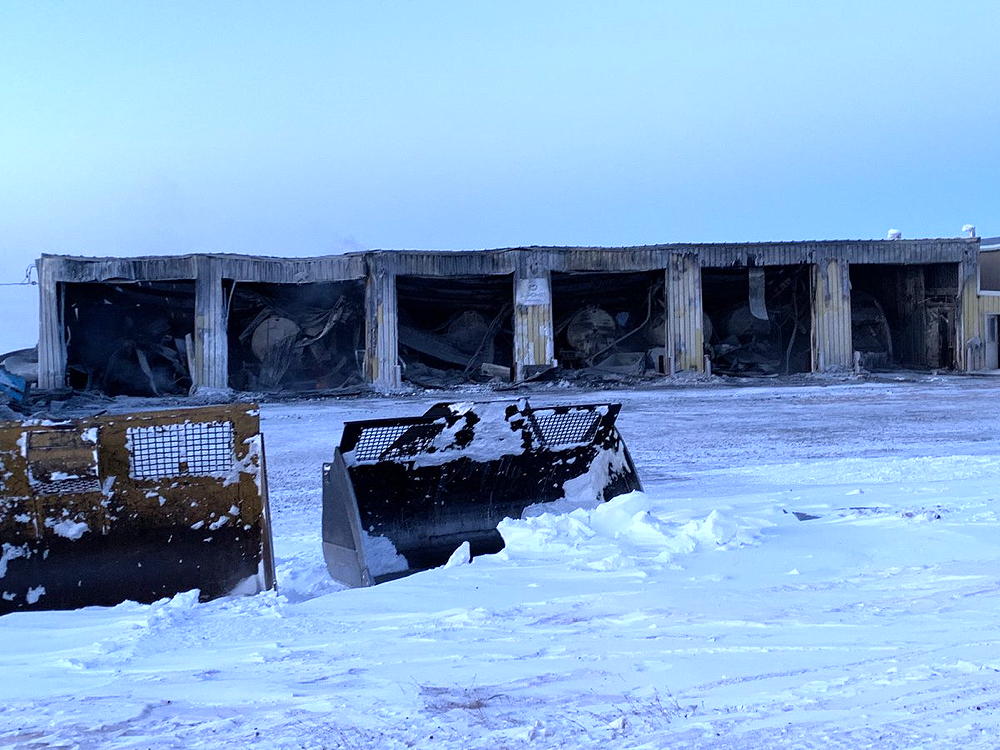 Baker Lake’s municipal garage is seen here on Tuesday morning, hours after a fire burned through the building. The garage housed the hamlet’s fleet of water and sewage trucks, as well as other heavy machinery, all of which are believed to be unusable. (Photo by Shane Niego) 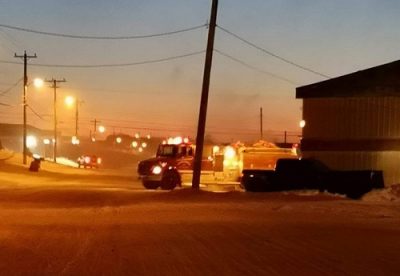 Arlene Ikinilik watched from a distance as firefighters in Baker Lake tried to put out an early morning fire at the community’s municipal garage.

Residents of Baker Lake are being urged to conserve water following a Tuesday morning fire that destroyed a number of the community’s municipal vehicles, including its sewage trucks.

The fire department responded to a call at 3:45 a.m. on Jan. 29, when flames and smoke were seen coming from the municipality’s six-bay garage.

The garage housed the hamlet’s fleet of sewage trucks—six of its seven trucks were parked there on Tuesday morning—as well as two front-end loaders, a dumptruck and a garbage truck.

“All of them are a loss,” said Sheldon Dorey, the hamlet’s senior administrative officer. “We’ve got one [sewage truck] left in town and our staffer is trying to get that one on the road as soon as possible.”

Contrary to what was previously reported, the community’s fleet of water trucks was parked in separate locations and not damaged in the fire.

But the fire left one sewage truck to serve a community of more than 2,000 people, its nursing station and other essential services.

The hamlet has been offered the temporary use of a sewage truck stationed at Agnico Eagle Mines’ nearby Meadowbank mine, Dorey said, along with another truck in Arviat.

For the short term, the municipality plans to operate sewage services 24 hours a day with the trucks it does have, until the community can build up its fleet again.

Despite calls to declare a state of emergency, Dorey said the community is managing with reduced resources for now.

The community’s schools and many of its businesses and government organizations remained closed on Jan. 29 due to the hamlet’s advice to conserve water.

Baker Lake’s housing association advised residents not to drain water from their sinks or bathtubs if a home’s sewage tank is full.

Fire comes during a period of extreme cold

The fire was largely out by about 9:00 a.m. on Tuesday morning, but continued to flare up throughout the day.

There have been no reported injuries in connection with the fire, and the RCMP is not investigating the fire as a criminal matter.

For now, Nunavut’s fire marshal is overseeing the investigation into how the fire started, though that office has yet to issue any comment.