Biden and Trudeau commit to modernization of North Warning System 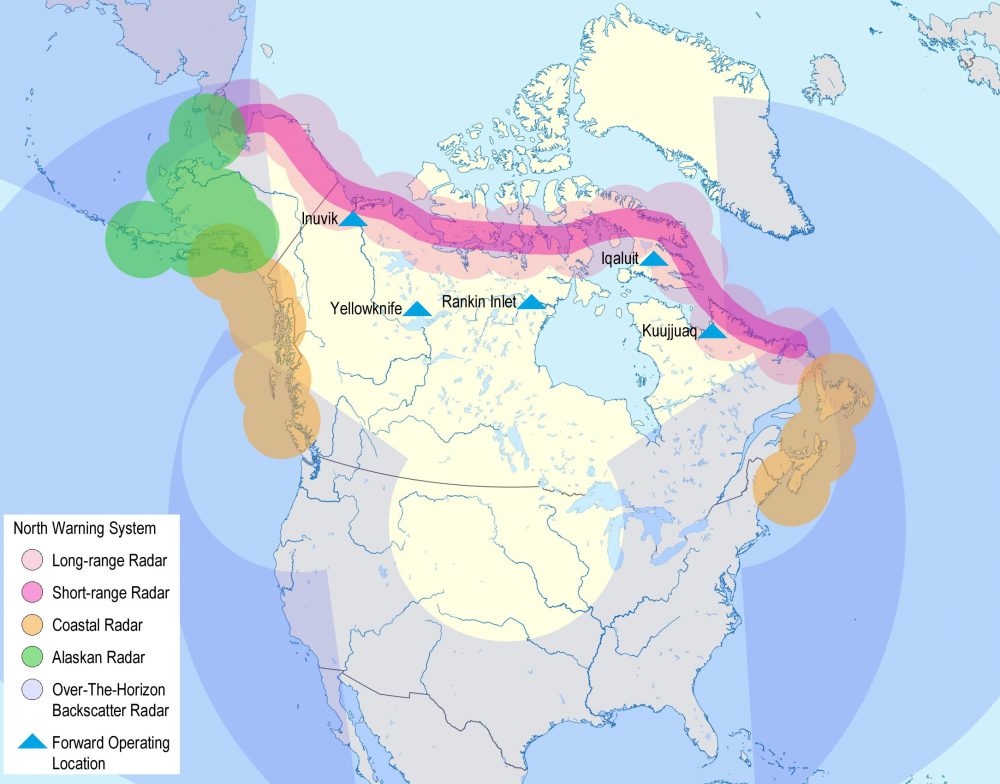 This map shows the extent of the North Warning System of radar stations as envisioned by Canada and the United States in 1987. When NORAD is modernized, it’s possible these radar stations may be moved further north. (Map courtesy of Department of National Defence)

Prime Minister Justin Trudeau and U.S. President Joe Biden committed to a modernization of NORAD after they held a virtual meeting on Feb. 23.

It would include what Biden called “an expanded U.S-Canadian Arctic dialogue” that will cover continental security, economic and social development, and Arctic governance.

NORAD’s best-known component is the North Warning System, the chain of 47 radar stations that runs from Labrador to Alaska. Those radar stations are now obsolete and their lifespan expires in 2025.

Replacing that system could cost an estimated $11 billion — so that could present a big opportunity for the Inuit birthright corporations who once held the contract to maintain the existing system.

“This is really, really profound. If two leaders like this can get on the same page, this can be transformative for the North, in a positive way, hopefully,” Davis said.

And through an Arctic-wide entity called Pan Arctic Inuit Logistics Corp., or PAIL, Nunasi has an interest in Nasittuq Corp., a partnership with Atco Frontec that once held the North Warning System maintenance contract.

Davis said there’s no doubt that federal officials in Ottawa know what Nasittuq is capable of.

“They’re clearly well aware of the work we’ve done in the past on the North Warning System and how it’s had a profound positive impact on our businesses, and certainly on employment,” Davis said.

Davis, an Inuk from Nunatsiavut, served 11 years as chair of the Nunatsiavut Group of Companies, which was also involved in the warning system contract.

“Everybody was aware of the North Warning System and many of us had family members who worked there. So it was a big thing for us,” he said.

Nassituq held the system’s maintenance contract between 2001 and 2014, when it lost it to Raytheon, a U.S. defence contractor.

But the same Inuit corporations who formed the PAIL consortium are interested in regaining that contract. To that end, they formed a group in 2018 called the Inuit Development Corporation Association to push for federal government contracts.

“Nothing is a given, clearly, but I think the fact that we’re all coming together, I think that’s a very strong signal of our commitment to try and secure that contract again,” Davis said.

While Trudeau and Biden have committed to modernizing NORAD, it remains unclear when this will happen.

James Fergusson, a professor of political studies at the Centre for Defence and Security Studies at the University of Manitoba, said that upgrading the North Warning System is only a small part of NORAD modernization.

“There’s discussions between U.S. and Canada military people about this. There’s planning going on. But they’re not out of the starting blocks yet,” Fergusson said in an interview.

At the same time, however, he said the U.S. and Canada are talking about a much-expanded capability, Fergusson said.

That would include new radar stations located north of where they are now, on islands that are part of the Arctic archipelago, as well as space-based assets and more naval surveillance in Arctic waters.

“So it’s a much bigger thing than simply the North Warning System as we understand it right now,” he said.

As for the new radar stations, they would likely be capable of detecting threats over the horizon, unlike the current North Warning System stations, which use a more limited type of radar, he said.

And to help detect more modern threats, such as cruise missiles launched from the ground or by aircraft, these stations will be moved further north.

And yet another part of what’s contemplated is an expansion of northern Canada’s forward operating locations, known as FOL sites.

The FOL site in Iqaluit includes three hangars capable of housing F-18 fighter jets, as well as a large barracks located off the road to the causeway.

“You need more of them up there potentially. So that’s going to be a major investment and development project as well,” Fergusson said.

And it could also include a big investment in a new telecommunications system because of the well-known inadequacies of northern Canada’s current system.

“It’s all going to have major implications for the communities up there,” he said.