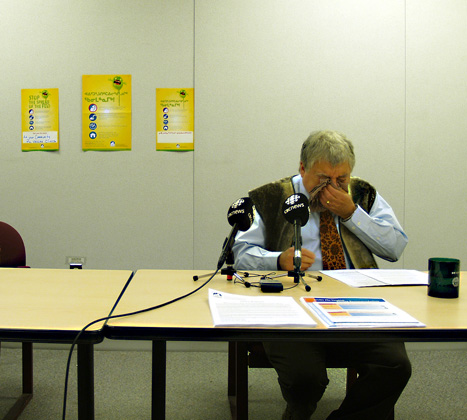 Nunavut health officials are getting ready to reach out and jab you.

Nunavummiut will get both shots at the same time, Sobol told reporters.

“These two flu vaccines can safely be given at the same time: one in each arm,” he said.

Five vaccine teams, consisting of three nurses each, will fan out across the territory to larger communities that need extra staff to help vaccinate their populations quickly. They’ll travel by charter aircraft and Sobol said the goal is to have the clinics finished by Nov. 15.

Smaller communities won’t get a visit from the teams, Sobol said, because the populations are small enough that health centre staff will be able to complete the mass vaccinations without extra help.

And while November in Nunavut can mean cancelled flights, Christine Hutchinson, the territorial mass vaccination coordinator, said having planes on stand-by means the teams should be able to complete their work in two weeks.

“We have the ability to move as soon as the weather clears,” she said.

Vaccination clinics will be held in community halls in other public buildings where it’s easy to organize large numbers of people. The exact schedule won’t be available until early next week.

The program also means that this year, the health department won’t be visiting major workplaces in Iqaluit and offering flu shots, as in previous years.

“People need to go to the mass community vaccine clinics in order to get their vaccine,” said Pam Coulter, the health department’s director of communications.

Nunavut’s announcement comes less than a day after Health Canada formally approved the H1N1 vaccine AREPANRIX for use in Canada. “This is a milestone in our efforts to fight the pandemic H1N1 flu virus,” said Leona Aglukkaq, the federal health minister, in a news release.

Children aged six months through nine years will get two half-doses of the H1N1 vaccine at least three weeks apart, while people 10 and older will get one dose of the vaccine. The vaccine isn’t authorized for use in children younger than six months.

According to a Health Canada handout distributed by Nunavut health officials Thursday, an adjuvant is a substance that boosts the body’s immune response to a vaccine. It includes a natural oil called squalene, water and vitamin E.

In June, the World Health Organization said there has been little research done on the possible effects of adjuvants on very young children and pregnant women.

While Canadian health officials have said there’s no evidence that there are any health risks with adjuvanted vaccines, the WHO still urged governments to make both types of vaccine available, the Canadian Press reported Thursday.

Pregnant women in Nunavut will get one dose of an unadjuvanted vaccine when its available, Sobol said.

The unadjuvanted vaccine is expected to be approved for use sometime next week. If it arrives later, Sobol said women who are more than 20 weeks pregnant should get one dose of the adjuvanted version.

And while health officials have said any Nunavummiut may get the H1N1 shot, Sobol admitted the territory currently has only enough for 75 per cent of the population. That’s the typical percentage of the population who have been vaccinated in previous years, he said.

But Sobol added Nunavut will get more vaccine if needed. The territory, along with other remote aboriginal communities, is at the top of Ottawa’s list for the swine flu vaccine.

And once again, Sobol pleaded with Nunavummiut to help prevent the spread of flu through frequent hand washing, coughing or sneezing into the elbow, and the regular cleaning of surfaces like doorknobs and telephones.