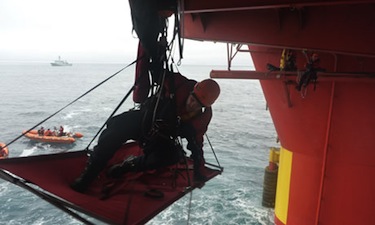 Greenpeace made it on to Cairn Energy’s rig off Greenland’s west coast— but their time their was short. Police moved in to arrest them on Sept. 2. (PHOTO WILL ROSE/GREENPEACE) 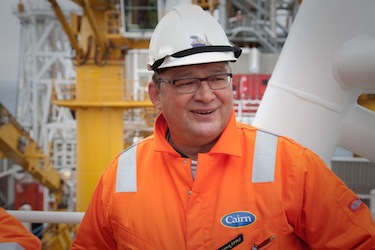 Greenland’s premier Kuupik Kleist says the Aug. 31 occupation by Greenpeace of a drilling rig off Greenland is “an illegal attack on Greenland’s constitutional rights. (PHOTO COURTESY OF CAIRN ENERGY)

Police arrested four Greenpeace activists Sept. 2 who had scaled an oil rig off Greenland’s west coast in an attempt to stall a oil drilling project by the Scottish company Cairn Energy.

The four were sent first to Aasiaat— and then deported, after being charged with trespassing, losing all non-personal equipment and receiving a fine equivalent to about $4,000 each.

The Guardian newspaper reported Greenlandic police arrested the four activists after stormy weather battered the “mountaineering-style platforms” Greenpeace had suspended from the underside of the Stella Don drilling rig.

Police and Greenpeace argued about the circumstances of the arrest. Greenlandic police dubbed it a rescue operation, while Greenpeace claimed police refused a request of the group to remove the activists before bad weather hit.

The activists are from the United States, Germany, Poland and Finland, the Guardian reported.

Mads Christensen Flarup of Greenpeace told Greenland’s Sermitsiaq newspaper that the group had achieved its goal by the stunt, saying that was to “create debate about the test wells in Greenland.”

“We also managed to stop Cairn Energy’s wells for two days so on that front, we had success,” Flarup said.

Kuupik Kleist, Greenland’s premier, had slammed Greenpeace on Sept. 1, saying it was “an illegal attack on Greenland’s constitutional rights” after four activists from the environmental organization scaled the sides of Cairn Energy’s rig on Aug. 31 and set up housekeeping there.

If Greenpeace can stop drilling for “just a short time,” then Cairn Energy will struggle to meet their deadline to complete the exploration before winter, Greenpeace said at the time.

Cairn’s rig had to stop drilling because any breach of the 500-metre security zone around it results in a routine shutdown.

Morten Nielsen, the deputy head of Greenland’s police, told the Herald Scotland their action was “a clear violation of the law” and promised to pursue them.

Kleist criticized the protesters for the impact they would have on Greenland’s “fragile economy.”

“The Greenland Government regards the Greenpeace action as being a very grave and illegal attack on Greenland’s constitutional rights,” he told the Herald Scotland on September 1: “it is highly disturbing that Greenpeace, in its chase for media attention, breaks the safety regulations put in place to protect people and the environment.”

His government “remains confident that the police and the executive authorities will continue to ensure that the legal business activities can continue undisturbed,” Kleist said.