“It’s a human right to know” 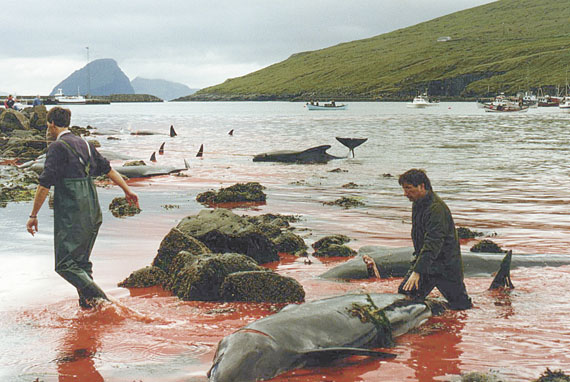 Pál Weihe, a doctor in the Faroe Islands, shown here at the bottom right, has hunted pilot whales, but now he’s told his fellow Faroese not to eat the meat and blubber from these traditionally-hunted whales because his research shows they’re heavily contaminated with health-damaging PCBs. (PHOTO COURTESY OF P. WEIHE)

COPENHAGEN — When Pál Weihe, a public health doctor in the Faroe Islands, told people there to stop eating pilot whale meat and blubber, he was accused of selling out to anti-whaling animal rights activists.

In 1998 Weihe had advised pregnant women and all women of childbearing age in the Faroes to stop eating pilot whales, but he said that other Faroese could safely eat pilot whale meat and blubber once a month.

Ten years later, Weihe changed his mind, and decided he had to expand this advisory to a total ban on all pilot whale meat and blubber consumption — to everyone, of all ages.

That’s because his new research results showed the heavy load of industrial pollutants in pilot whales can lead to even more serious short and long-term health impacts, said Weihe in Copenhagen, where he will speak at this week’s international conference on Arctic climate change and pollution.

His findings carry an Arctic-wide significance because pilot whales are related to other whales, such as belugas and narwhals, which widely consumed by Inuit.

It’s “a reasonable assumption that the findings in the Faroe Islands are representative of the kinds of adverse effects encountered in other communities,” he said.

But Canada won’t be issuing any similar prohibition on eating belugas or narwhals, said Russel Shearer, chairman of the Arctic Monitoring and Assessment Program and manager of Canada’s Northern Contaminants Program— who is also in Copenhagen for the same conference on climate change and pollution.

In Canada, the choice to issue health advisories lies with the health departments of the various northern regions, said Shearer, suggesting that levels of toxic contaminants may not be as high in the Canadian Arctic as they are in the Faroes.

But Inuit who eat fat from belugas and narwhals, dosed with industrial pollutants, are “likely” to experience the same set of harmful impacts, Weihe told Nunatsiaq News.

All Arctic communities pay a health price for the trans-boundary global pollution for which they bear only little responsibility, he said.

And they need to know what the risks are before they sit down to eat.

“I have killed lots of whales. I have a good appetite,” Weihe said. “But to me it’s a human right to know, and then you can chose whether to change what you do. I have to tell people what the risks are.”

Despite the furor around this latest advisory in the Faroe Islands — where whaling is the foundation of the national identity— Weihe said he “had a professional obligation to say what we had found and tell people.”

“Is it politically correct to suppress information?” asked Weihe, who admits his findings made the Faroese government “very nervous.”

Weihe’s message now is that it’s still okay to hunt the whales— just don’t eat them.

Faroese probably appreciated hearing the bad news from one of their own people, rather than from an outside public health expert, Weihe said.

Weihe’s ban on eating pilot whale blubber and meat came after a set of new research findings on a group of 2,300 children he’s followed from birth.

He found exposure to polychlorinated biphenyls (PCBs), toxic chemicals used in industry, is linked to deficient immune function in children.

He found these children reacted more poorly to tetanus and diptheria immunizations — commonly given to infants in Canada — in addition to subtle effects on other systems in their bodies.

These tests on the children in the Faroes showed that the early postnatal exposure to PCBs led to this decreased vaccination response.

This could become more important when combined with other diseases, Weihe’s research found.

And even a “slight impairment” to the immune system could lead to more respiratory tract infections.

Contaminants in pilot whales also appear to increase the risk of Parkinson’s disease, hypertension and hardening of the arteries in adults who eat pilot whale regularly.

Without all these toxic contaminants, Faroese, who have hunted and eaten pilot whales for hundreds of years, long before the animals were contaminated, would be “even smarter” — and healthier, Weihe said.