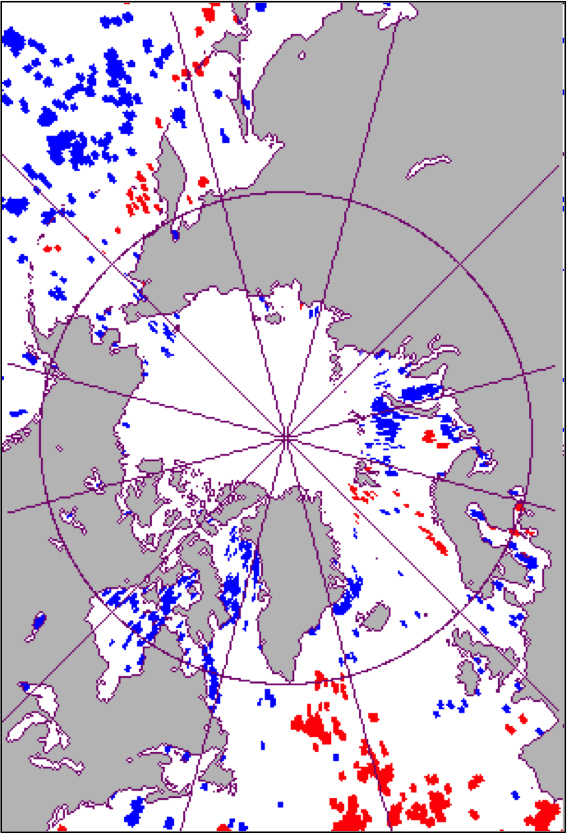 Fish and whales in the Arctic are likely to be affected by the earlier blooms of tiny plants called phytoplankton, in blue, detected in about 11 per cent of the area of the Arctic Ocean closest to the North Pole. Delayed blooms, in red, were evident to the south. (IMAGE/ SCRIPPS INST. OF OCEANOGRAPHY, UC SAN DIEGO)

Warming temperatures and melting ice in the Arctic may be causing a progressively earlier bloom of tiny ocean plants in the spring, and this shift could hold consequences for the entire Arctic food chain, say scientists at Scripps Institution of Oceanography in California.

The scientists found “significant trends” towards earlier blooms of these plants, called phytoplankton, in about 11 per cent of the area of the Arctic Ocean closest to the North Pole.

During the one- to two-week period in the spring, these blooms stimulate production of zooplankton, microscopic marine animals, which become a food source for fish and whales.

“The spring bloom provides a major source of food for zooplankton, fish and bottom-dwelling animals,” said oceanographer Mati Kahru, in a March 2 news release from the Scripps Institution. “The advancement of the bloom time may have consequences for the Arctic ecosystem.”

Scientists plotted the yearly spring bloom of these tiny plants at the base of the ocean food chain-in the Arctic Ocean, notes the news release.

And they found the timing of these blooms has occurred earlier each year for more than 10 years.

By analyzing satellite data, they determined that the spring bloom has come up to 50 days earlier in some areas over that period.

The earlier Arctic blooms occurred in areas where there’s been less ice cover. These openings have created gaps that make early blooms possible, say the researchers, who published their findings in this month’s edition of the journal Global Change Biology.

A match or mismatch in timing of this food source could explain much of the annual variability of fish stocks in the region, they say, and, over the longer term, it may have a larger impact on fish and whales.

“The trend towards earlier phytoplankton blooms can expand into other areas of the Arctic Ocean and impact the whole food chain,” say the researchers, who used satellite data from 1997 to 2010 to create their bloom maps.

These tiny plants also lock up carbon dioxide, a greenhouse, climate-warming gas. But as these plants die, or the marine animals that eat them die, the gas goes back into the atmosphere.