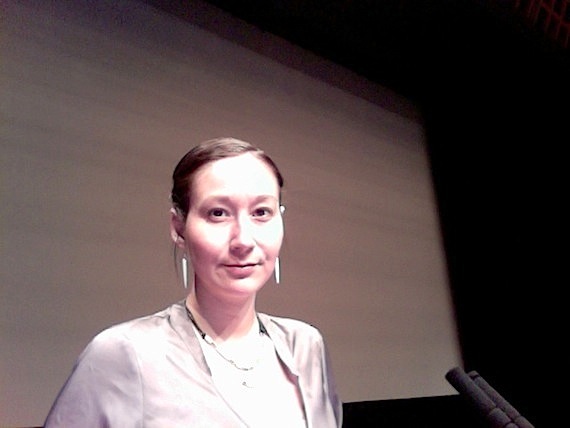 “In our Inuit communities we are observing, with growing concern, the various changes in the weather and environment in our Arctic homelands, which are linked to the global climate changes,” Parnuna Egede, a biologist from Greenland and an advisor on environmental issues at the Inuit Circumpolar Council, at the May 4 opening of this week’s conference on Arctic climate change and pollution in Copenhagen. “At the same time we are facing the negative impacts on our health, imposed by the effects of contaminants ending up in the Arctic regions.” (PHOTO BY JANE GEORGE)

COPENHAGEN — The world must rally to curb climate change and stop acting like hungry, uncontrollable toddlers: that’s the message delivered at the opening session of an international conference on Arctic climate change and pollution in Copenhagen.

If people are “big enough to have caused climate change,” then we need to clean it up, said James White from the University of Colorado.

His advice: “as a species, we act like two year olds,” so it’s time to shape up and get serious.

But politics and the democratic process may prevent the world from reacting quickly enough to the climate change challenge, he said.

“It’s very difficult to get politicians to act,” White told the gathering.

But Arctic climate change and its “real impacts” are simple enough to understand, he said.

If you add climate-warming greenhouse gasses to the environment, you’ll warm the planet — “it’s as simple as falling off a chair,” White said — you’ll hit the floor.

In the same way, if the climate warms over the next 100 years, to temperature levels not seen in three million years, trees will return to the Arctic, and the sea level will rise.

“What’s really is remarkable is how far it’s going to rise,” according to models, White said.

How high? As much as 50 metres over time, he said, with rising water drowning states, nations and cities.

“This is where we are going. You can build all the dikes you want but the water will come in,” he said.

The most startling new finding in the report, Snow, Water, Ice and Permafrost in the Arctic, released today at the conference, is how fast changes in the Arctic, such as sea ice melt, are occurring, said Jim Overland of the National Oceanic and Atmospheric Administration, and one of the reports authors, in his opening words to the conference.

In the Arctic, less sea ice and higher ocean temperatures are causing even more sea ice melt, higher air temperatures and more warming on the land, he said.

“We didn’t expect how fast the interaction of these processes would go,” he said.

Inaction on climate change means “the planet is going to be roasted by 2100,” said Bob Corell, the chairman of the 2004 Arctic Climate Impact Assessment, at the conference.

But Corell and the other speakers warned tackling climate change won’t be easy, because this will also require changes to the global economy and limits to the world’s hunger for energy, which already surpass the total amount of power which could be generated by harnessing the wind.

In her speech to the conference, Lykke Friis, the Danish minister of climate and energy, acknowledged that “things are moving in the wrong direction.”

But she maintained there’s progress on tackling with climate change even if the world’s nations don’t reach a “big-bang” deal.

“The goal is clear. We must limit the global temperature [increase] to two degrees,” Friis said.

However, scientists at the Copenhagen conference say this figure is unrealistic: they say the world’s current commitments to limit climate-warming greenhouse gas emissions will produce a 3.9 C global temperature increase and a much higher rise in the Arctic. 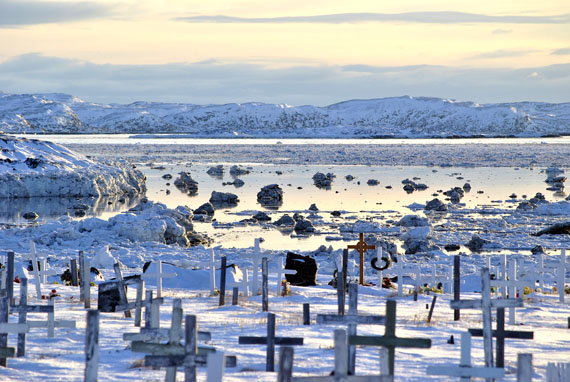 A sign of the weather that the Arctic can expect as the climate warms: rain stopped falling on Iqaluit Jan. 6, 2011 but the temperature rose to plus 2 C in the morning and there was still plenty of open water in Frobisher Bay, with very little ice formation. (PHOTO BY JIM BELL)