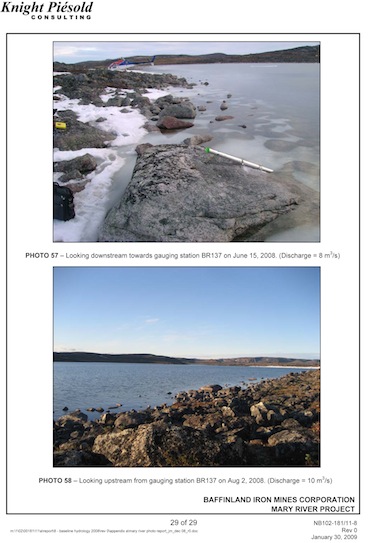 The draft Environmental Impact Statement for the proposed Mary River Iron Mine shows how the mine may impact the quality of lake and stream water as well as their stocks of Arctic char. 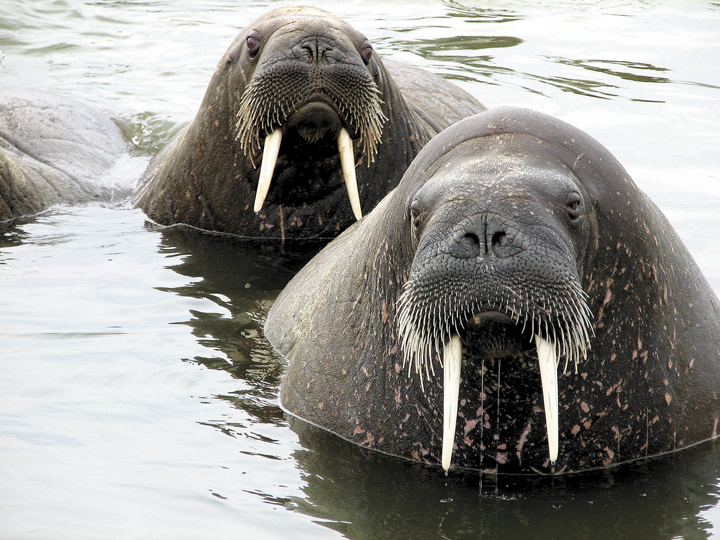 “It is likely that at least some individual walruses will be affected multiple times by icebreaking during the course of a single ice-covered season….potential walrus habitat will change for the life of the Project as a result of the footprint of the dock structures,” says the draft Environmental Impact Statement for the Mary River iron project in northern Baffin Island. (FILE PHOTO)

After plowing through nearly 1,000 pages on how the Mary River iron mine will affect seawater, lakes and rivers, you’ll be glad you’re not an Arctic char, ringed seal or walrus.

These are among the species that appear to stand the greatest chance of suffering ill-effects, injuries or even death when the construction and operation of the huge mine complex in north Baffin get underway, as early as 2012.

Two volumes of the 10-volume draft Environmental Impact Statement for the project delve into its many future impacts on the freshwater and marine environments.

While the draft EIS concludes those impacts are “not significant,” “negligible,” “small in magnitude,” “fully reversible” or will “not have any consequential effects,” Arctic char and some of the 22 marine mammal species in North Baffin waters appear headed for some challenging times.

Arctic char eggs may end frozen up in thick sediments; vibrations from the detonation of explosives may cause damage to incubating eggs; and, culvert placements for the 150-kilometre railway will result in a loss of nine per cent of stream habitat throughout the mine’s construction and operation.

Due to water diversions or changes in flows and water levels, young Arctic char may find themselves stranded or unable to reach their normal hang-outs.

And blasting off Steensby Inlet during the construction of the port there may leave some fish with broken ribs, ruptured blood vessels or worse.

Noise-sensitive walrus may suffer permanent hearing damage from blasting. While belugas, narwhal and bowheads are expected to flee ships and other sound-making activities, no one is certain how walruses will react.

In addition to disturbance caused by some of the 100-plus airplanes and underwater noise from blasting and constant shipping, walrus may find fewer suitable places for overwintering, breeding, nursing, feeding and hauling out.

“It is likely that at least some individual walruses will be affected multiple times by icebreaking during the course of a single ice-covered season… potential walrus habitat will change for the life of the Project as a result of the footprint of the dock structures,” says the draft EIS, noting that “walruses in close proximity to the Stensby port site during periods of construction may, on occasion, be exposed to sound levels high enough to cause hearing impairment.”

Ring seals may see their lairs wiped out as ships pass by, although, the draft EIS points out, “mortality along the ship track in the landfast ice of Steensby Inlet would be limited to a three-week period in late March and early April.”

The draft EIS, which Baffinland Iron Mines Corp. delivered to the Nunavut Impact Review Board earlier this year before its buy-out by the steel-making giant ArcelorMittal, lists many activities dealing with waters on land and sea, which will may have boomerang effect on fish and marine mammals:

• On land, lakes and streams will be drained, diverted and blocked;

• These waterways will be coated with dust from blasting;

• Waste water from sewage treatment facilities may affect water quality, although the potential effects associated with discharge of treated sewage from the 1,200 person-Mary River Camp into Mary River, which include increases in nutrients, more metals, sediment, fecal coliform bacteria and temperature changes, “are anticipated to be fully reversible, once the camp site is decommissioned and rehabilitated,” the draft EIS says; and,

• Seawater will see its salinity, temperature, sediments and ice altered by blasting, pile installation, dredging, extraction, rock filling, drilling, shipping and the release of ballast water— as well as a 95 per cent probability of diesel spills.

The discharge of ballast water — kept in ships to increase their stability — also looks problematic.

Icebreakers coming into Milne Inlet will exchange ballast in the North Atlantic or Labrador Sea.

But in Steensby Inlet, ballast discharge won’t begin once the ships move into more protected waters in northern Foxe Basin or Steensby Inlet.

Icebreakers keep all their ballast during periods of ice cover to facilitate ice breaking, says the draft EIS.

But the ballast dumped in the Steensby Inlet won’t always be the same salinity or temperature as the seawater outside. And the release of this ballast may see some new foreign organisms cast into the seawater.

These giant icebreakers will also create a track that could reach up to 1.5 km by the end of the winter.

Ships the size of the carriers proposed for mine — more than 300 metres long — will also require an area of about 1.85 km across to complete a turn.

As a result of this and the release of heated ballast water, landfast ice in the Steensby port area will remain disturbed throughout the winter.

While the draft EIS does acknowledge many impacts, mitigation efforts are seen as the key to limiting the damage.

For example, the EIS says potential for injury or direct mortality to Arctic char will be reduced or avoided by conducting underwater blasting at Steensby Inlet during early spring when most Arctic char have not yet moved into marine waters for the summer.

As for walrus, aircraft will be prohibited from flying low for passengers to “get a better look” or for photography. Shipping routes will avoid walrus haul-out sites, winter feeding areas, and potential calving areas.

And to prevent new critters from entering the Arctic waters, the draft EIS refers to a plan “to replace foreign coastal species in ballast taken onboard while in a foreign port with oceanic species that are less likely to survive when discharged into Canadian coastal waters.”

Residents of the Igloolik, Hall Beach, Coral Harbour, Cape Dorset, Kimmirut, Iqaluit, Clyde River, Pond Inlet, Arctic Bay, Resolute and Grise Fiord will get a chance to learn more about the project this month and next during NIRB public information meetings. 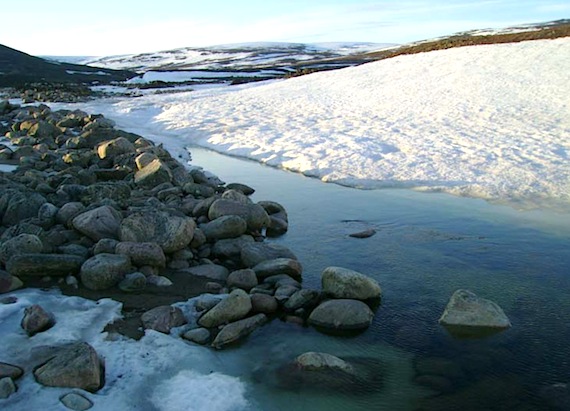 The proposed Mary River iron mine includes many lakes and waterways, as this photo from the project’s draft Environmental Impact Statement shows.