But this pattern didn’t develop this year because the Arctic Ocean was sending warmth into the atmosphere.

As in December, January’s warm temperatures came from the unfrozen areas of the ocean, which continued to release heat to the atmosphere.

Warmer-than-normal temperatures also destabilized the “Arctic Oscillation,” a pattern of differences in air pressure between the Arctic and mid-latitudes.

When this difference weakens, the Arctic oscillation is said to be in a “negative” phase — Arctic air slides south and warm air slips north.

Near the end of January, the negative Arctic oscillation pattern broke down and turned “positive,” which usually favors ice growth, and cold temperatures — like those seen in Iqaluit this week.

January also saw the lowest ice extent for the month since the beginning of satellite records.

The pattern is similar to that of the winter of 2006 when below average return of sea ice then produced a record low summer-ice extent during the 2007.

Arctic sea ice extent averaged over January 2011 was 13.55 million square kilometres, even lower than the record low set in 2006.

Normally, these areas freeze over by late November, but this year Hudson Bay did not completely freeze over until mid-January. The Labrador Sea still remains largely ice-free, the NSIDC notes. 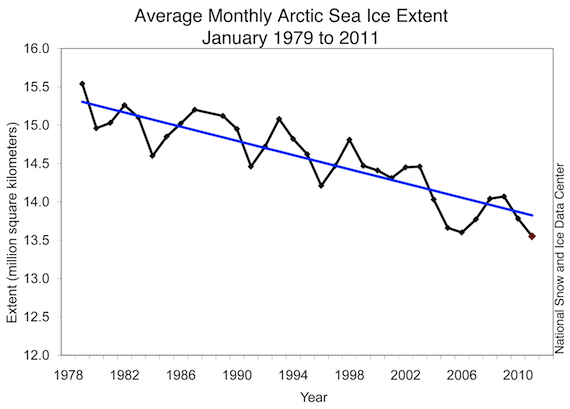 January 2011 had the lowest ice extent for the month since the beginning of satellite records. (IMAGE/NSIDC)