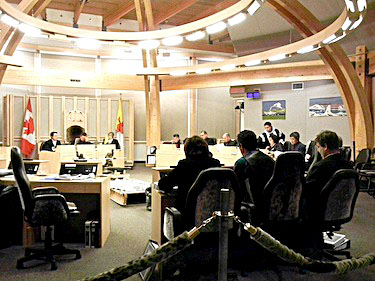 the Nunavut legislature’s committee of the whole looked at the budget request of the department of education March 3 and March 5. Here, Kathy Okpik, deputy minister of education, Hunter Tootoo, education minister, and David Pealow, controller of school operations, address the committee on March 4. (PHOTO BY JANE GEORGE)

The GN will use most of the $18 million to hire more than 60 new school staff, he said.

The department, which is also responsible for handing out social insurance checks to Nunavummiut living in poverty, wants to increase the amounts of money that social assistance recipients receive for food and clothing.

This will add $3.8 million to the $28.3 million that Nunavut spent this past year on income support.

“It is crucial we offer Nunavummiut the tools they need to become capable, and engaged in the opportunities and future prospects of our territory,” Tootoo said.

The increase means social assistance recipients will see their monthly food allowance rise by 15 per cent and their regular and seasonal clothing allowances up by 35 per cent and rolled into a single benefit of $50 per person a month, up from $36.66 a month.

“While the social assistance program is intended as a program of last resort, demands in this area continue to be very high,” noted Moses Aupalukuq, MLA for Baker Lake, who is also the chair of the standing committee on social wellness.

Aupaluktuq also said in some communities the benefits are “not used in a manner for which they were intended.”

Speaking in the committee of the whole March 8, Tootoo said how the numbers of Nunavummiut on income support have dropped,

The increases to education department budget include:

• $8.4 million more for school operations, of which $7.4 million is slated for more school staff to lower the student-educator ratio;

• $570,000 to support inclusive education so all “students will receive educational opportunities focused on their individual strengths and needs;”

• $417,000 to develop an early childhood curriculum and resources;

• $2.5 million more for the financial aid for Nunavut students program, FANS, which now assists 263 students at Nunavut Arctic College and 165 at post-secondary institutions in southern Canada.