A no to move of Nunavik House to Villeray

“The injury inflicted is too deep to pursue the relocation project” 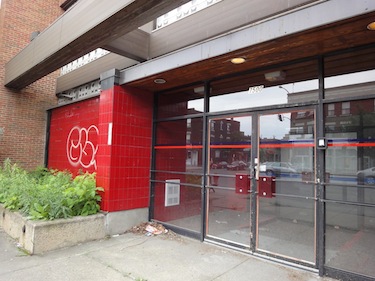 The former Chinese hospital at the corner of Faillon and St. Denis Streets in the Villeray borough of Montreal will remain unoccupied— at least by Nunavimmiut. The Nunavik Regional Board of Health and Social Services announced it will no longer proceed with its plan to renovate the building into a patient boarding home for Nunavimmiut receiving health care in Montreal. (PHOTO BY JANE GEORGE)

KUUJJUAQ— The Nunavik Regional Health and Social Services board announced Sept. 9 that its board of directors has decided to abandon plans to renovate a former Chinese hospital in the Villeray borough of Montreal into a residence for Nunavimmiut receiving health care services in the city.

“The injury inflicted is too deep to pursue the relocation project,” said Alacie Arngak, the president of the NRBHSS’s board, in a Sept. 9 news release.

Gilles Boulet, the regional health board’s assistant executive director, told Nunatsiaq News on Sept. 10 that board members had passed their resolution to abandon the Villeray project on Aug. 25, but did not want to make the decision public until after Quebec’s health department had responded to the resolution.

The regional health board did not mention when its directors had passed the resolution in its Sept. 9 news release, which came two days after a Sept. 7 meeting of the Villeray borough’s council.

Then borough mayor Anie Samson said she would not recommend lifting a zoning freeze for the former hospital, imposed earlier this summer, without more information.

Samson said, among other things, that she wanted to see social, economic and cultural impact studies, plus a list of alternative sites, all within four months, before lifting the moratorium on new development at the hospital site.

The Sept. 9 news release from NRBHSS says its board, the Tulattavik health board and the Inuulitsivik health centre “deplore the situation” which developed around the relocation of Nunavik House and the northern module patient services into the empty hospital at the corner of Faillon and St. Denis Streets.

Inuit might not be well received in the borough even though support was voiced for the project, the news release says.

Earlier this summer, a citizens group in Villeray that initially expressed fears about the project had posted a website dubbed Danger Imminent, which warned residents of a treatment centre that would draw prostitution, drug trafficking and violent crime to the neighbourhood.

And the mayor had also said that “when you bring in 125 people who are away from their familiar environment, it’s new, it’s the big city, it’s a party. Incidents are sure to occur.”

“To tell me there won’t be any problems, that’s lying to us,” Samson told Radio-Canada about the plan for an Inuit patient residence in her borough.

A new location for Nunavik and the Northern Module patient services centre now being looked for, says the NRBHSS news release.

Until then, patients and escorts will continue staying at the current Nunavik House on St-Jacques St. in NDG and at boarding homes and hotels around Montreal.

“We remain optimistic that a solution will be found in the near future,” the news release says.

“The population remains at the heart of our priorities,” said Jeannie May, executive director of the regional health board.

The committee of Villeray residents that circulated a petition which collected more than 650 signatures in favour of the hospital renovation project put out a statement on Sept. 9, saying its members were “sad and disappointed” by the decision not to move ahead with the project.

“We respect and understand the decision of Nunavik’s health board, although we are ashamed by the shabby welcome given by the borough to this project. The committee is outraged by the special treatment that elected officials gave this file. We wish Inuit all the best with their future relocation efforts and hope they will receive a warmer welcome,” says the committee’s statement.

At the Sept. 7 meeting in Montreal, where Samson said she received a letter from the Montreal Health Authority at 5:00 p.m. that day, which passed the promotion of the project to the Nunavik regional health board.

At a public meeting in June, the Montreal health authority’s director, David Levine, had promised to set up an implementation committee and hire consultants to prepare studies on the project.

But Samson said she heard nothing more from Levine until shortly before the Sept. 7 borough meeting, despite two requests for information.