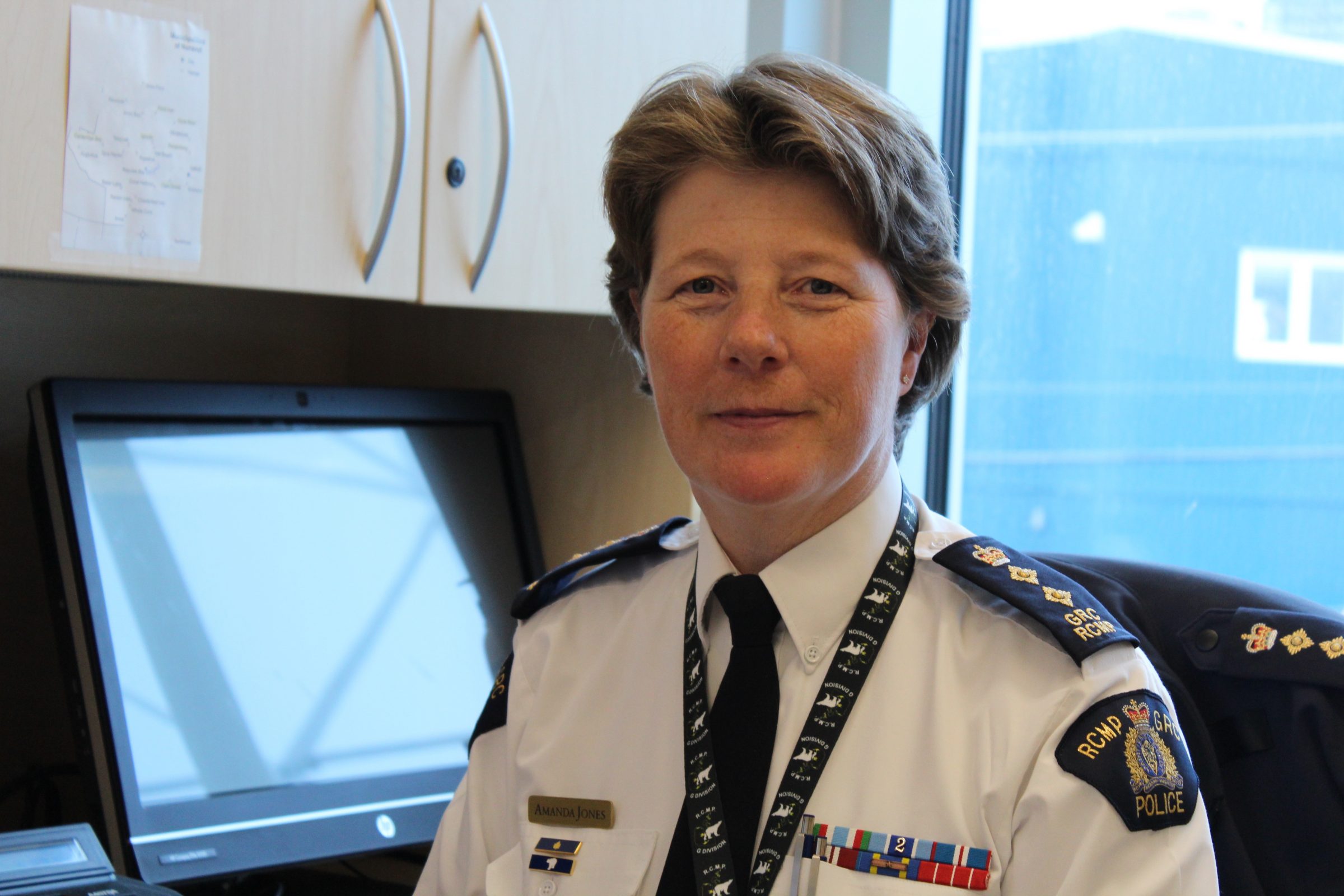 In Chief Superintendent Amanda Jones’ office in Iqaluit, a shiny seal pelt lies next to a display of rows of colourful medals from her decorated 27-year career in the RCMP. A television attached to the far wall is tuned to a news channel. Outside, the wind whips against the side of the force’s Nunavut headquarters on a grey day.

“At least it’s not snowing anymore,” Jones says with a laugh.

Jones took command of Nunavut’s RCMP “V” division back in January. She’s the eighth commanding officer and the first female to command the division. Nunatsiaq News caught up with Jones again earlier this month after she had been on the job for just over 100 days.

“I’m really enjoying living in Iqaluit,” Jones said. “I have really strong, hard-working members. It makes it easy for me to do my job.”

Jones is responsible for 25 detachments and 185 employees. So far, she has spent time at several of those detachments, including those in Pangnirtung, Cambridge Bay, Cape Dorset, Gjoa Haven, Igloolik and Taloyoak.

“Everyone I’ve met, from members, to council members, to community members, have all been very positive and I think we are all looking for the same goal: safe homes and safe communities,” she said.

In January, Jones told Nunatsiaq News that she would prefer the territory’s RCMP to have civilian oversight in its investigations.

Currently, the Ottawa Police Service is contracted by the Nunavut government to externally review any RCMP-related violence, such as shootings or in-custody deaths.

“That’s still an ongoing conversation with the Government of Nunavut and the Justice Department specifically,” Jones said.

As things stand, a memorandum of understanding between the two police forces says that OPS is to report directly to the Justice Department, “as opposed to feeding information to us,” Jones said.

“It’s more of a direct line between OPS and Justice,” she said.

Jones said she is also keeping a close eye on crime rates in the territory.

“I talk with detachment commanders every day. I do know that our stats are increasing every year and we’re increasing our file loads and that the population is growing too,” she said.

High on her list of priorities as the territory’s head Mountie are the recruitment of Inuit in the division and cultural orientation for new employees. She said she plans to implement more Inuktut-language training for her staff.

“So when they come and go into their communities, they have some awareness and it’s not just trying to learn on the go and making some mistakes and causing a rift in the relationship,” she said.

Jones said a complaint she regularly receives is that the division currently has no Inuktut-speaking staff in its telecommunications department. This means no operators who dispatch calls for the RCMP through the Operational Communications Centre, or OCC, are capable of taking a call in Inuktut.

Jones has already taken immediate action to resolve the issue by creating what she refers to as a “call-taker” position for an Inuktut speaker. This individual would speak to Inuktut-speaking callers and then provide the information to the OCC dispatcher.

If the “call-taker” does not have the skills necessary to apply for a position at the OCC, Jones said they will receive on-the-job training to be successful in applying for the job later on. This could include things like learning different computer programs used by the OCC, typing skills and interview prep.

“My goal when I leave here is to have a higher percentage of Inuit and for that to be successful continuing on,” she said. “We need to start representing the communities … 85 per cent being Inuit, we don’t represent that yet,” she said.

Beyond recruitment, Jones said she and her team are working to build trust with communities. She said some days, the distance and isolation between Nunavut’s 25 communities can be frustrating.

“You want to get in and be there for community members,” she said.

Jones’ eyes light up when she talks about the RCMP’s outreach to young Nunavummiut, who she hopes will consider a career in the force.

“We have a long way to go still, but we can’t represent them if they don’t join us,” she said.

One questions she hopes to answer during her time as chief superintendent is, “How do we get young people, young Inuit boys and girls to envision themselves as an RCMP member?”

Jones said her detachment commanders and recruiting officers have visited schools and Nunavut Arctic College campuses throughout the territory to talk to youth about career options in the RCMP.