ICC says yes to oil and gas, with conditions

“The pace of resource development has profound implications” 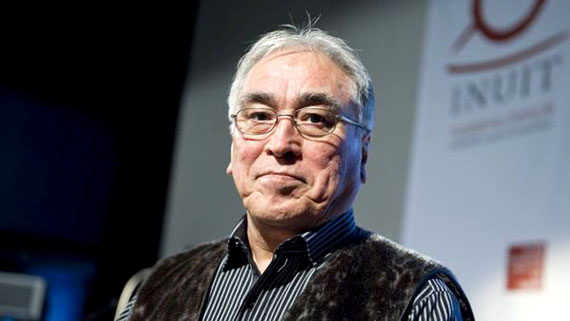 Aqqaluk Lynge, chair of the Inuit Circumpolar Council, said he wants to see more “ethical standards” and more Inuit involvement in the development of renewable and non-renewable resources on Inuit lands. That’s the key to the May 10 ICC declaration on development principles in Inuit Nunaat, which Lynge signed in Nuuk, one day before the Arctic Council’s ministerial meeting there. (FILE PHOTO)

In a long-awaited declaration (see document embedded below) issued May 11 in Nuuk, the Inuit Circumpolar Council says yes to development in what ICC chair Aqqaluk Lynge calls the oil and gas highway between Greenland and Nunavut, but only subject to strict conditions.

The ICC released the document, called “A Circumpolar Inuit Declaration on Resource Development Principles in Inuit Nunaat,” one day prior to the May 12 Arctic Council meeting in Nuuk.

Lynge told Nunatsiaq News that the ICC declaration is not intended to give a green light to development — but to make sure that development happens in the right way.

Lynge said he wants to see more “ethical standards” and an acknowledgment on the part of all developers that Inuit are no longer the “cartoon character Eskimos of 300 years ago.”

Inuit are no longer isolated in the Arctic, he said, but this means Inuit must have a say in development and ensure they also benefit from the estimated 100,000 jobs that could flow from resource development in Russia, the United States, Canada and Greenland.

“We want the opportunity to have development centered on our own society,” Lynge said.

The ICC declaration reflects the “general development” of the Arctic, he said.

In it, the ICC says Inuit “welcome the opportunity to work in full partnership with resource developers, governments and local communities in the sustainable development of resources of Inuit Nunaat.”

But the ICC also says the development of oil and gas and mineral resources in Inuit lands must be sustainable.

Resource development must benefit Inuit, involve Inuit at every step, and avoid causing social and environmental damage or “an overwhelming influx of outside labour” from coming into Inuit lands.

“A proper balance must be struck” the ICC says, noting “healthy communities and households require both a healthy environment and a healthy economy.”

This means conomic development and must go hand-in-hand with social and cultural development, the ICC says.

“Responsible non-renewable resource development” can contribute to the well-being of current and future generations of Inuit, the ICC says.

That’s because it will encourage training, provide jobs and business opportunities, and more money for governments.

But development must see Inuit involved in “related policy-making” to “the long-lasting benefit of Inuit.”

Inuit are the most affected, the ICC document says, so they must receive the greatest benefit and take a lead role in decision-making.

The ICC declaration, signed by Lynge, along with ICC vice-chairs Duane Smith (Canada), Jim Stotts (Alaska) and Carl Christian Olsen (Greenland), follows a meeting that ICC held this past February in Ottawa on resource development in the Arctic.

• renewable resources have sustained Inuit from the time preceding recorded history to the present. Future generations of Inuit will continue to rely on Arctic foods for nutritional, social, cultural and economic purposes;

• the pace of resource development has profound implications for Inuit; and

The ICC also wants to see the creation of a circumpolar emergency fund, a pot of money that would go towards paying for the clean-up of any pollution that results from resource development.

In another future declaration, the ICC may look at how living resources, such as hunting and fishing, should be managed, Lynge suggested.