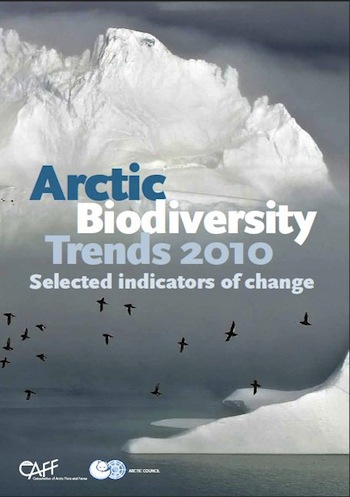 Climate change is bad news for the plants and animals— and people— who live in the Arctic, says a new report on biodiversity in the Arctic.

Scientists who have studied the impact of global warming on Arctic lands and waters are now turning their attention to how these changes affect the plants and animals in today’s Arctic.

And climate change is “the most far-reaching and significant stressor,” they say, with the potential to damage the biodiversity or variety of these life forms by making it impossible for them to live in the polar regions.

For the report, scientistslooked at 22 “indicators,” from polar bears to Arctic char to murres, whose state of health reveals trends underway in the Arctic.

These indicators show the Arctic has changed “dramatically” during recent decades, causing the disappearance of habitats for Arctic plants and animals, the report’s authors say.

For example, caribou have declined by about 33 per cent since populations peaked in the 1990s and early 2000s. While some of the smaller populations are either stable or increasing, the majority of the large herds are in decline due to climate change and industrial development, like mining, they note.

“The broad spectrum of changes occurring across the tundra environment may delay or slow the recovery of some herds, and some herds may disappear altogether,” they say.

Arctic vegetation is also changing. Various species of grasses, are, in some places, being replaced by species typical of more southern locations, such as evergreen shrubs.

A study conducted on Ellesmere Island over 13 years found plants became more productive over time, suggesting that this High Arctic ecosystem is “in transition.”

Trees are also beginning to encroach on the tundra. By 2100, the tree line may advance north by as much as 500 kilometres, resulting in a loss of more than half the tundra area of today.

“Depending on the magnitude of these and other changes, certain ecosystems may no longer be considered ‘Arctic’. The result may be that many of the species thriving in the Arctic today are not able to survive there in the future,” the report’s authors say.

They also look at linguistic diversity as an indicator of change.

Traditional knowledge of plants and animals and their uses is embedded within indigenous languages, the report notes.

But Arctic languages face an “uncertain future,” with 20 languages extinct since the 1800s, and 10 of these extinctions taking place after 199o.

“The increasing rate of language extinction emphasizes the need to increase our understanding of the cultures and traditions contained within these languages, and to increase efforts aimed at revitalizing them,” say the report’s authors.

They make seven major findings in the report which can be downloaded at http://www.caff.is:

• Arctic habitats for plants and animals, including sea ice, tundra, glacial ponds and lakes, and permafrost peatlands have been disappearing over recent decades;
• Some species of importance to Arctic people or species of global significance are declining;
• Climate change is emerging as the “most far reaching and significant stressor “on the diversity of Arctic plants and animals, but complex interactions between climate change and other factors have the potential to magnify impacts on biodiversity;
• Since 1991, the extent of protected areas in the Arctic has increased, although marine areas remain under-represented;
• Changes in Arctic biodiversity are creating both challenges and opportunities for Arctic peoples;
• Long-term observations based on the best available traditional and scientific knowledge are required to identify changes in biodiversity, assess the implications of changes, and develop adaptation strategies; and,
• Changes in Arctic biodiversity have global repercussions.