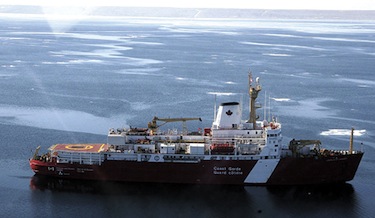 The Canadian Coast Guard’s Louis St. Laurent is off on a four-month voyage to collect information which will help support Canada’s claim to the Arctic Ocean’s rich resources. (FILE PHOTO)

The Canadian Coast Guard’s Louis St-Laurent icebreaker left St. John’s, Newfoundland this past weekend for a four-month trip along the Atlantic coast and into the Arctic Ocean.

Its mission: to help map and survey the continental shelf, with the goal of bolstering Canada’s claim over the Arctic Ocean’s rich resources.

As it travels from St. John’s through the Northwest Passage, the ship plans to collect seismic and seabed data to “further aid navigation and scientific knowledge of Canada’s Arctic waters,” a July 10 federal government news release said.

That information will be used to prepare Canada’s submission to the Commission on the Limits of the Continental Shelf, under the United Nations Convention on the Law of the Sea.

Canada ratified that agreement, known as UNLCOS, in November 2003 and plans to file its submission by December 2013.

Under UNCLOS, countries can claim offshore territory beyond their 200-nautical mile economic zone if they can prove underwater geology is an extension of their continental shelf.

At stake is control over the potentially huge oil, natural gas, and mineral reserves that scientists believe lie under polar waters.

“Our government is strongly pursuing international recognition of the full extent of Canada’s continental shelf,” said Joe Oliver, the minister of natural resources, in the news release. “The research conducted by the Extended Continental Shelf Program will be the cornerstone of our submission and determine with precision where Canada may exercise its sovereign rights.”

The Louis St. Laurent will also offer assistance to commercial shipping until mid-November. It’s scheduled to arrive back at St. John’s on Nov. 18.

The ship was originally scheduled to be decommissioned in 2000, but a refit has extended its decommissioning date to 2017 when a new $750-million icebreaker, called the John G. Diefenbaker, is supposed to be launched.