Ottawa chips in $800,000 for tuberculosis fight 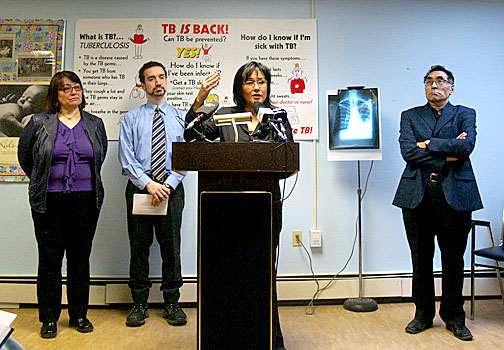 Nunavut public health officials are taking the battle against tuberculosis to the streets.

“TB is the disease that…has a profound impact on individuals in our communities,” said Leona Aglukkaq, Nunavut’s MP and the federal health minister. “Our goal here is to stop the spread of TB in Nunavut.”

But the project will begin only in Iqaluit, even though 2010 was a bad year for TB in Nunavut, with a record number of active cases, hitting 102 by year’s end, Aglukkaq told a news conference in Iqaluit Jan. 12. Nearly half those cases were in Iqaluit.

Gonzalo Alvarez, a doctor with the Ottawa Hospital Research Institute who’s working with Nunavut on the program, said the territory’s rate of new cases is 50 times higher than the national average.

Taima TB aims to raise awareness about the disease through town hall meetings and social media like Facebook, while teams fan out across Iqaluit to help people with latent TB get treatment. The program will also boost screening for the disease and push treatment for people with active cases.

Even so, Alvarez said eradicating TB is going to take years of sustained effort.

“The TB problem in Nunavut will not be fixed overnight,” he said.

But he said Taima TB’s approach was crafted with Nunavut’s dark history of tuberculosis treatment in mind. In the 1950s and 60s hundreds of Inuit were taken south for TB treatment. Many died far from home, or simply never returned North.

“It caused a lot of pain and heartache for the people,” Alvarez said. Aglukkaq added she has memories from her youth of people “leaving our communities and never coming back.”

But Taima TB has the backing of high-ranking Nunavut officials.