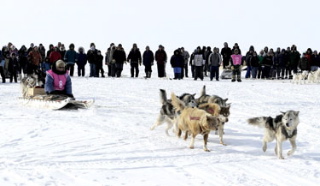 Raygilee Piungituq and his dog team races off from the Nunavut Quest starting line in Pond Inlet last April.

Piksuk Media Inc. has developed a television mini-series, a one-hour documentary and a video game to bring more information about Nunavut’s dog-sledding traditions to the public.

The first one-hour documentary segment is about halfway though post-production, explained producer Charlotte Dewolff. This documentary will air on CBC-SRC Quebec this fall.

The miniseries of six half-hour episodes is slated to air on APTN this spring, Dewolff said.

But the third application of the company’s material– the video game – may be the most unique.

“We’re hoping the game will be exciting, entertaining and maybe a little educational,” Dewolff said.

The video game will use Nunavut Quest footage and interviews with dog sledders as informational pop-up windows, which will emerge during the game to advise the player’s decision-making.

“Nunavut Quest lends itself to the development of the game,” Dewolff said. “To a certain extent [the game] emulates the traditional movement of Inuit to their camps in the spring.”

For example, the information on snow and ice conditions ahead could influence a player’s choice of route – and the care and feeding of sled dogs between races.

Sanguya said players will have to choose among different foods for their dogs, decide how to train them or how to build a qamutik.

A camera crew along the race route might have distracted hunt-trained dog teams, because the dogs would veer off-course to investigate.

So the race’s organizers told Sanguya – a competitor in the race – that if Piksuk cameras caused any problems, the resulting delay would be added to his race time.

To get around that, Piksuk had three GoPro mini-cams, which were lent to competitors to carry during their trip.

The sequences captured by these cameras included a moment when the dogs belonging to one competitor, Pond Inlet’s Niko Inuaraq, took off without him.

Inuaraq’s camera captured his trek in pursuit of them team until another camera-carrying racer – Clyde River’s Jake Gearheard, found him and gave him a lift.

A Piksuk camera team also travelled with Nunavut Quest competitors as they set out for Pond Inlet on their way to the race to gather stock footage for the various projects ahead.