“The reality is, the government is paying for this anyway” 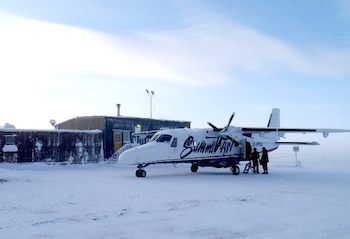 Nanisivik airport in April, 2009. The Government of Nunavut is studying ways to reduce the cost of travel to Arctic Bay, Resolute Bay and Grise Fiord. (PHOTO BY CHRIS WINDEYER)

A charter air route connecting Nunavut’s three High Arctic communities could take some of the sting out of flying south, according a study prepared for the Government of Nunavut.

“High Arctic communities endure high costs of transportation which result in extreme isolation for residents who are unable to travel,” reads the report, prepared by the consulting firm LPS Avia.

“The economics of providing profitable air services in the High Arctic are challenging because of the small market, the harsh climate and the lack of basic infrastructure.”

The report, brought to community meetings last week by Peter Taptuna, the Minister of Economic Development and Transportation, concludes government intervention is “the only way to reduce costs to a reasonable level for residents.”

The study proposes a government-contracted charter service connecting Grise Fiord, Resolute Bay and Arctic Bay with a Nunavut community that has a more competitive airline market.

The idea is that a charter route would cut the cost of airfare out of the High Arctic. The study examines charter routes connecting the region with Pond Inlet, Cambridge Bay, Rankin Inlet and Iqaluit.

Researchers concluded the most economical option would be a mainline charter route connecting Resolute Bay and Arctic Bay with Iqaluit by a Dash 8 aircraft.

Grise Fiord, with its small population and short runway, would get service from a feeder route using a Twin Otter.

By bundling all the traffic together, a charter could also help bring down the cost of government and medical travel, the study says.

But Quttiktuq MLA Ron Elliott said the GN has neither the appetite, nor the money, to run its own charter route. Elliott said EDT staff reject LPS Avia’s proposal that the GN run its own service.

“The GN does not actually like their suggestion that the GN runs and owns and operates an airline sort of service,” he said.

Any charter, Elliott said, would be contracted out to one of the airlines.

Taptuna, who visited the three High Arctic communities with Elliott last week, didn’t respond to a request for an interview before deadline.

Elliott said the federal government has an obligation to help residents of Grise Fiord and Resolute Bay — originally relocated to those communities to show Canadian use of the High Arctic — travel outside of their home communities.

And he said roughly 50 per cent of all air travel to and from the region is medical travel, paid for by the federally-funded Non-Insured Health Benefits program.

“The reality is, the government is paying for this anyway,” Elliott said.

The LPS Avia report recommended the GN should avoid directly subsidizing air travel in the High Arctic. That option, the report said, would be too expensive and do nothing to improve the cost and “connectivity” of High Arctic flights.

For example, providing people with subsidized travel vouchers to be exchanged for airfare would do nothing to improve cargo rates, while like prompting demands from other Nunavut communities to be included.

Such a program could also lead to the hoarding, sale or trading of vouchers, although the report does not say why that would be a problem.