“Canada needs to uphold its responsibility to the North” 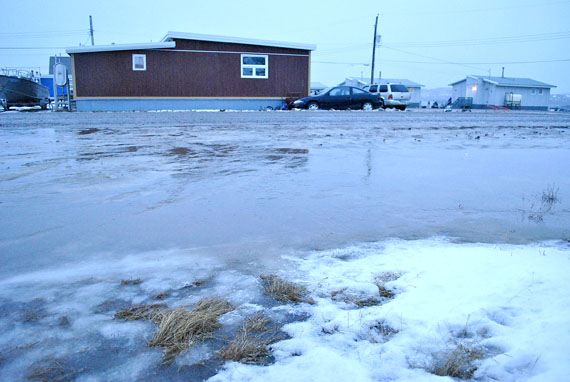 A typical scene in Iqaluit, Nov. 20, 2010: Until the first week of December, soaring temperatures brought many weeks of rain, fog and drizzle to Nunavut’s capital and the ice on Frobisher Bay didn’t start to form until about Dec. 8. (FILE PHOTO)

Ottawa has pledged $400 million to help developing countries reduce carbon emissions and adapt to the effects of climate change.

Nunavut’s environment minister says Ottawa should extend the same generosity to the territories.

“I think that Canada needs to uphold its responsibility to the North and look and deal with their own country before committing to other assistance to underdeveloped countries,” Shewchuk said in a telephone interview from the United Nations climate change talks in Cancun, Mexico.

“We [Nunavut] are living climate change,” Shewchuk said. “It’s not a matter of when it’s going to happen.”

The territory needs help to monitor and adapt to melting permafrost, which is expected to damage buildings and infrastructure, Shewchuk said. He’s also worried about the impact on traditional Inuit land use and travel.

“If [the federal government] is serious about sovereignty and Canada’s North, we really need viable communities to be living in,” Shewchuk said.

Under the Copenhagen Accord negotiated last year, Canada agreed to reduce its greenhouse gas emissions by 17 per cent from 2005 levels by 2020.

This year, talks wrapped up Dec. 11 with new agreements on help for developing countries, combating emissions from deforestation and sharing green technology.

But the conference ended without any agreement on what to with the Kyoto Accord, which expires in 2012.

The Kyoto Protocol, adopted in Japan in 1997, saw industrialized, richer nations promising to cut greenhouse gas emissions by 5.2 per cent from their 1990 levels by 2012.

Shewchuk said this year’s talks in Cancun were more productive than last year’s round in Copenhagen, which ended with a general agreement by developed countries to reduce greenhouse gas emissions and to raise billions of dollars to help developing countries do the same.

“Around the room you do see more communication going on with countries,” he said. “There’s 194 countries here and for everyone to be satisfied with the final outcome, it’s pretty much impossible.”