“A fitting legacy for Ipellie”

The late artist and writer Alootook Ipellie, who died in 2007, may be gone but his work has not been forgotten, especially in Europe, where a recent exhibition that included many of his drawings and prints took place in Switzerland.

Ipellie, an accomplished illustrator and writer, was born in 1951 at a hunting camp near today’s city of Iqaluit. He died Sept. 8, 2007 of a heart attack in the hallway of his rooming house, at age 56.

The most recent exhibit of his work took place from Oct. 23 to Nov. 14 in Thayngen, Switzerland, showing Ipellie’s work as well as other pieces from Iqaluit, Cape Dorset and Pangnirtung.

The exhibit featured 15 original works by Ipellie, two prints and many copies of Ipellie’s drawings, cartoons and memorabilia from the private collection of Annalise and Kurt Biedermann.

Ipellie was the inspiration for this volume, Ottawa editor and writer Joyce MacPhee told Nunatsiaq News.

Due to copyright issues, none of Ipellie’s writing was published in the book, she said, although a cartoon was included.

“Both the art exhibition and book are a fitting legacy for Ipellie and helped to both educate and entertain those interested in the Inuit and the Arctic,” MacPhee said.

Ipellie, who dreamed as a boy of becoming a famous artist, chased that dream most of his life, Nunatsiaq News wrote in his 2007 obituary.

Besides becoming a noted cartoonist, Ipellie went on to be a writer, designer, photographer, and eventually editor of the publication Inuit Today, a magazine published by the then-Inuit Tapirisat of Canada.

To fill space in the magazine, Ipellie would draw one-box cartoons. His drawings, which often commented on social issues, soon found a following among Inuit readers.

Later Ipellie drew a comic strip for Nunatsiaq News with the characters “Nuna and Vut.”

He drew hermaphrodite shamans, an Arctic crucifixion, and Brigitte Bardot about to be clubbed by an oversized seal.

Ipellie’s work slowly gained recognition, with tours during the early 2000s to showcase his older work in Germany and Australia.

And after more than a decade of artistic silence in Canada, he unveiled an exhibit of new drawings in Ottawa in 2007, which the Ottawa Citizen described as “superb.” 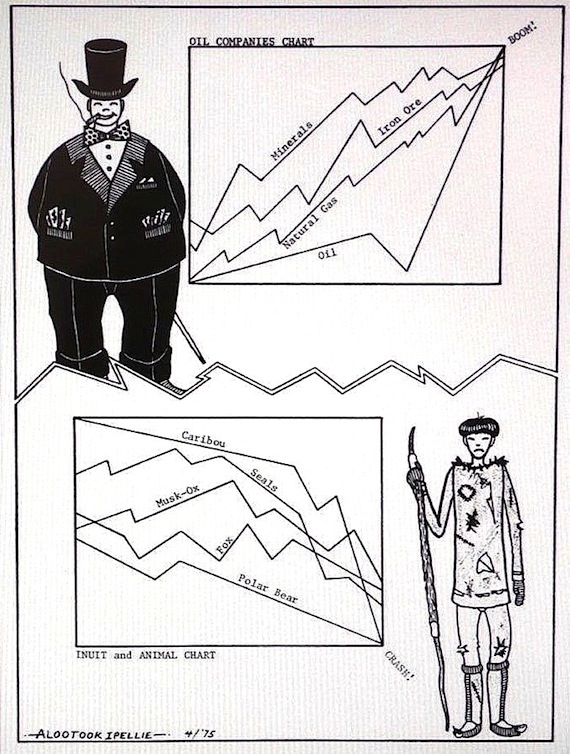 This cartoon by the late artist and writer Alootook Ipellie, which was recently on display in Switzerland, dates back to 1975— but, given recent events, its droll humour seems prescient. (IMAGE COURTESY OF ANNALISE BIEDERMANN)