Redfern, with 30 per cent of vote, defeats three other candidates 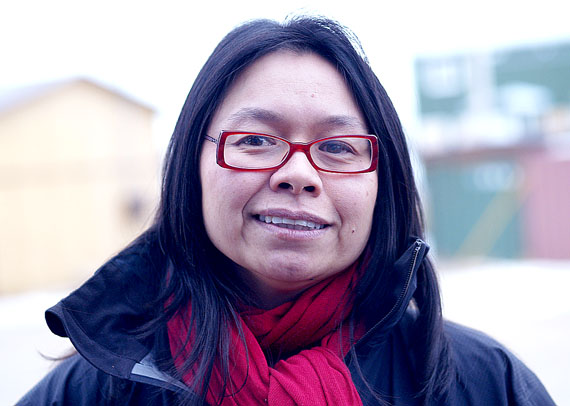 Madeleine Redfern was declared Iqaluit’s mayor-elect at around 9:15 p.m. Dec. 13. With only one poll left to report, Redfern, with about 30 per cent of the vote, opened up a wide lead over challengers Al Hayward and Paul Kaludjak, who each sank to about 24 per cent. Jim Little was in fourth place, with about 19 per cent.

“I’m pleasantly surprised,” Redfern said. “It was a nice, open honest election. Everyone who ran clearly cared for this community.”

As of late in the evening Dec. 13. Redfern’s 377 votes amounted to about 30 per cent of total ballots cast, well ahead of her nearest competitors Al Hayward and Paul Kaludjak, who tied with 314 votes, or 24 per cent each.

“My first order of business is to take direction and lead from my fellow councillors and find ways to get the council to provide more direction and oversight to city administration, to increase communication between council and the public at large,” Redfern said. “Our next priority is to lobby, lobby, lobby the federal and territorial governments to get the infrastructure we need.”

Redfern said she has a basic grasp of the city’s finances, having already looked at the city’s budget and council meeting minutes.

Jim Little, a former city councillor, finished in fourth place with 241 votes, about 19 per cent of total votes cast.

Little attended the vote count at the Iqaluit cadet hall but left disappointed.

“Well, I’m going home,” he said on his way out of the building.

Voter turnout is estimated at about 41 per cent, similar to the 2009 election that returned outgoing mayor Elisapee Sheutiapik to the mayor’s job. Only one poll had yet to report results by midnight Dec. 13.

Winning a landslide 757 votes – 59 per cent of ballots cast – Akumalik swept into the vacant council seat left by Natsiq Alainga-Kango, who resigned a year after her election in 2009.

Stephen Mansell sat well back with 335 votes and Ed DeVries won only 159 votes.

Akumalik, an community liaison worker with the Qikiqtani Inuit Association, said he was surprised to win by such a wide margin.

“I’m just happy that people believed in me,” he said. “I’ll just get to work and try to build a trust between the council and the community.”

Meanwhile, Jack Anawak, with 723 votes, won election to the Iqaluit District Education Authority, where three vacant seats were up for grabs.

Corinne Attagutsiak, in second place with 659 votes, and Heather Fanjoy, with 537, have been declared elected to the other two seats. Matthew Ayres sat in fourth place with 372.

A poll-by-poll breakdown for Iqaluit is available here: http://bit.ly/eMMOJz.