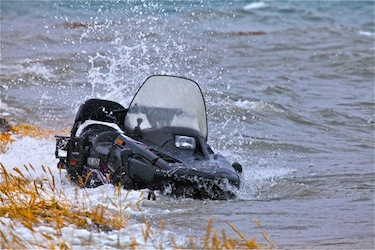 Tides along Wakeham Bay in Kangiqsujuaq washed up against parked boats and snowmobiles, creeping only metres away from some houses along the shoreline. (PHOTO BY YAAKA JAAKA)

Due to the high water, it was a mess down by Salluit’s shore as this photo taken Oct. 9 shows. (PHOTO BY LUCASSIE USUITUAYUK)

Wind and rain storms along Nunavik’s Hudson Strait and northern Ungava coastline recently combined to produce some of the highest tides that residents say they’ve ever seen there.

Heavy rains and a strong northern wind pushed tides unusually close to houses along the shore in the communities of Salluit, Kangiqsujuaq, Quaqtaq and Kangirsuk during the weekend of Oct. 8 to 11.

In Salluit, powerful waves sucked out the gravel barrier built to protect the 10 or so homes that line the shore there.

“I’ve never seen anything like that,” a resident told Nunatsiaq News. “We had lots of rain, snow, northern winds and huge waves.”

In Kangiqsujuaq, waves pushed perilously close to storage containers on the short located just behind the local co-op.

“It was pretty windy. The waves were really strong and came really close to the containers,” said George Pilurtuut, manager of Kangiqsujuaq’s co-op store. “But nothing was damaged.”

Some Kangiqsujuaq residents who live along the shore say this was the closest the water had ever crept to their homes, coming within metres of their dwellings in some cases.

While tides are not regularly metered in Nunavik, early October is one of two periods during the year where extreme tides can happen.

And these higher-than-normal tides generally occur when there’s a new moon, which fell on Oct. 7.

Heavy rain also contributed to the impact of the high tides. So far in October, higher than average amounts of rain have fallen across Nunavik, according to Environment Canada meteorologist Andre Cantin.

Strong northerly winds also played a role in high tides seen in some parts of Nunavik, he said.

“If the winds (continue to blow) from the same direction for many hours, that can push water along the shoreline and produce higher than normal tides,” Cantin said. 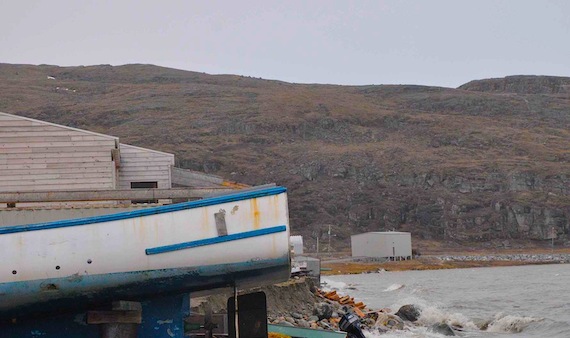 Powerful waves, which battered Salluit Oct. 8 to 111, sucked out parts of a rocky barrier along the community’s shoreline. (SUBMITTED PHOTO)