Justice, health staff fear most “dangerous drug on the face of the planet” 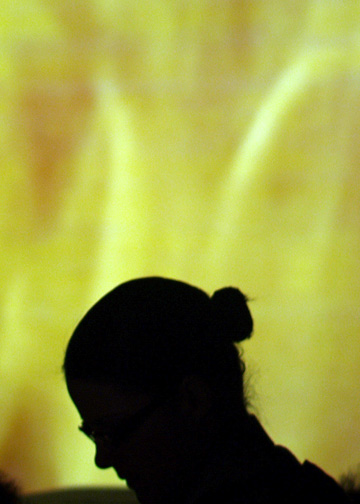 RCMP Cst. Angelique Dignard is silhouetted in front of footage of a burning crystal meth lab during a presentation in Iqaluit Dec. 10. Police and social service workers fear an influx of the highly addictive drug could strain Nunavut’s public services to the breaking point. (PHOTO BY CHRIS WINDEYER)

“Methamphetamine by itself is considered the most addictive and the most dangerous drug on the face of the planet,” said Cpl. Trevor Allen of the Nunavut RCMP’s drug section.

The September arrest of a man alleged to have been carrying a small amount of meth on a flight to Iqaluit from Montreal triggered alarm bells among local law enforcement and healthcare workers, who staged an information session Thursday.

Patrick Larouche, 32, was allegedly caught Sept. 20 at the Iqaluit airport with small amounts of crystal meth, marijuana and hashish. He was to make his first court appearance in Iqaluit Dec. 15.

Allen said that’s the first time police have seen the drug in Nunavut, and he hopes it will be the last.

Crystal methamphetamine is made from the psuedoephedrine found in over-the-counter cold medicines, combined with a nasty brew of household chemicals found in everyday items like solvents, matches, drain cleaner and brake fluid.

The drug can come as a white powder or white or brown crystals and can be snorted, smoked, injected or swallowed.

Meth users experience feelings of confidence and joy while on the drug, as well as irritability and aggression, especially when coming down. The high lasts up to 16 hours, and feeds a cycle of binging during which time addicts are interested in only one thing, doing more meth, said Cpl. Angelique Dignard.

In the process, they often commit crimes to support their habit, while neglecting or abusing their children. And users and dealers who cook their own meth turn their homes into toxic, flammable death traps.

“Nothing else matters except getting that rush,” she said. “The meth user is a public danger…because their work lives, their home lives, none of that matters.”

Dignard asked the room full of healthcare, social service and law enforcement workers if Nunavut, already staggering under high rates of violence, poverty and substance abuse, could handle the impact of crystal meth. The answer was a resounding no.

But Nunavut’s isolation, often said to be one root cause of many of its drug and alcohol problems, will also help police combat the introduction of meth into the territory, Allen, the drug squad officer, said.

The airline and cargo systems are easier to monitor for meth trafficking, and it’s also easier for police to pick up on anyone who might try to import or purchase the quantities of cold medication needed to run a meth lab, he said.

“Most other communities and cities across North America would love to be in our shoes,” Allen said. “We’re able to step out in front of this, educate the public, put in a bunch of prevention initiatives and quite literally stand at the gate and do everything we can to keep [meth] out.”

Allen said that means RCMP will continue to seek tips from Nunavummiut when they know of drug shipments bound for the territory.

“We’re going to rely heavily on information from the public when it comes to any illegal substance coming through,” he said.