“We have dramatic changes taking place” 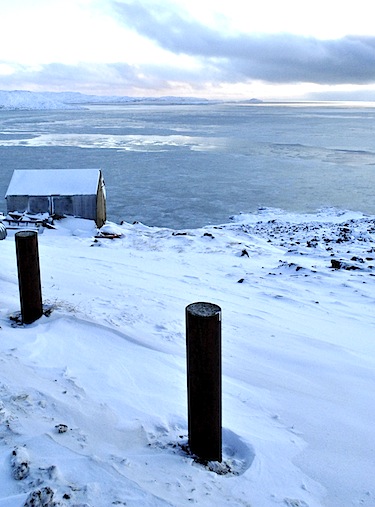 This is how Frobisher Bay looked earlier this month when the ice was just beginning to form. Ice formation is abnormally slow this year in the Eastern Arctic, according to an ice expert from the Canadian Ice Service, who says this could lead to more and worse storms. (PHOTO BY JIM BELL)

OTTAWA— You might think of scientists as calm and cool.

But the first three presenters during the opening session of the three-day ArcticNet conference in Ottawa sounded alarmed by the increasingly visible signs of Arctic warming and the limited amount of money that Canada will spend to understand what’s happening.

Ice has cracked up — once in a while taking Nunavut hunters with it. Lakes continue to dry up, while permafrost melts and the tundra is greening, 650 scientists, officials and northerners heard Dec. 15.

Observations from the ground in the Eastern Arctic, from places like Iqaluit — where ice in Frobisher Bay is only now forming — and views taken by satellites at 500 kilometres above the earth’s surface showed ArcticNet participants that ice formation in 2010 is abnormally slow.

So far this winter, it’s been “very, very slow,” and like last year “very late in freezing up,” said Trudy Wohlleben, an ice forecaster with the Canadian Ice Service.

The most “unusual things [are] going on in the winter,” Wohlleben said.

Nothing is progressing as it used to, she said, listing a string of peculiar happenings:

• air temperatures 20 C above normal at the beginning of the year in the Baffin Island communities of Clyde River and Qikiqtarjuaq;

• large ice cracks south of Resolute Bay last January, which caused a hunter to float off on an ice floe;

• and other cracks in land-fast ice spreading throughout the High Arctic islands, endangering research stations, causing problems for polar trekkers and swallowing up a Twin Otter.

This past spring, ice on Hudson Bay broke up three to four weeks earlier, and the Nares Strait between Ellesmere Island and Greenland, which usually freezes fast from February to July, never froze up solid.

This year, looking ahead into 2011, may carry similar surprises, with recent air temperatures 20 C registering above average over the Foxe Basin, Wohlleben said.

Weak ice could also lead to more storms as ice cracks cause water temperatures to warm and then lead to even more ice break-up and more storms in a frightening loop.

What’s needed is more monitoring with more remote sensing devices like the buoys dropped on ice lands earlier this year, she said.

More monitoring of lakes and other fresh waterways also needs to be done, because they’re good indicators of climate change, said Frederick Wrona from the University of Victoria.

In the western Arctic he’s seeing lakes slumping into the water, drained lakes and new pools of water forming on the land when permafrost melts.

“We have dramatic changes taking place,” with the Arctic becoming a place of rain instead of snow, said Wrona, who predicted that there will be more extreme events like floods in the Arctic’s future.

With 60 Arctic lakes slated for study, he’d like to place more buoys in the water to better gauge the changes going on.

And more money for Arctic science would also help Greg Henry from the University of British Columbia keep his research project going.

Henry, who has been studying vegetation across Canada’s Arctic for the past 20 years, seeing a major portion of this money dry up this year.

From Kugluktuk to Kangiqsualujjuaq, more than 600 researchers, elders, students and local researchers looked at berry-producing plants, people who live in the North, such as the mountain cranberry (kimminaq), crowberry (paurngaq), blueberry (kigutangirnaq) and the cloudberry (aqpik).

Now there’s a group of trained and interested local researchers in place, but the money earmarked for this project has ended and is unlikely to start flowing again until 2017 when a string of research stations— linked to the new Arctic research station in Cambridge Bay— start up.

Canada should be spending more money on Arctic science as it did during the International Polar Year.

“We should be doing as much as we were getting in IPY,” he said, when Canada set aside $150 million for Arctic research.

The good news for Arctic scientists eager to learn more about climate change is that ArcticNet, which funds projects involving about 150 researchers across Canada, can expect to see some more money from the federal government.