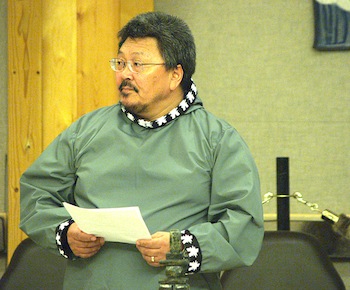 Requests for hiring casual staff are falling through bureaucratic cracks and that’s having an impact on government services, says the MLA for Nanulik.

Johnny Ningeongan said requests by Government of Nunavut staff to create or extend casual positions often get no response. This hurts program delivery and frustrates people looking to work but waiting for paperwork.

Citing government statistics, Ningeongan said the GN employs almost 700 casual workers, 60 per cent of whom work for the Department of Health and Social Services.

Shewchuk said the GN is trying to reduce its reliance on casual hires, but said he’d look into Ningeongan’s complaints.

Tagak Curley, the Health and Social Services Minister, announced a coming review of the Child and Family Services Act.

Nunavut still uses the old Northwest Territories act. A knowledge sharing forum held in December revealed a desire to incorporate Inuit family values and knowledge into a new version of the act. Curley tabled a report from that forum in the assembly June 8.

Curley said an advisory committee, including representatives from Nunavut Tunngavik Inc. and the regional Inuit associations, will oversee the review process.

Curley said public consultations on the creation of a new act will begin “over the coming months.”

The Nunavut Outfitters Liability Protection Fund, set up with $5 million worth of federal and territorial money, has no registered members, admitted Keith Peterson, the finance minister, June 8.

Responding to a question from Quttiktuq MLA Ron Elliott, Peterson said the fund, set up last year, has no applicants and has paid out no claims since its inception.

Peterson said outfitters in Nunavut appear to be using private insurance. He added the GN will consider this summer whether to cancel the program and use the money for something else.

The percentage of territorial government jobs filled by Inuit has dropped from this time last year, according to the latest figures released by the GN.

Fifty-one per cent of the nearly 3,900 government jobs were staffed by Inuit as of March 31, 2010, according to the latest edition of Towards A Representative Public Service, which tracks Inuit employment.

Inuit employment in the government reached a high of 52 per cent in March, 2009.

The departments of Executive and Intergovernmental Affairs and Culture, Language, Elders and Youth continue to have the highest levels of Inuit employment, at 68 per cent.

Among government departments, Environment fares the worst, with 41 per cent Inuit employment. At the Nunavut Housing Corporation, 39 per cent of workers are Inuit.

More than 1,500 Inuit work for the GN, nearly half in “paraprofessional” jobs. GN staffing is at 78 per cent capacity, with 868 positions still vacant.