Salluit’s future to be built on bedrock foundation 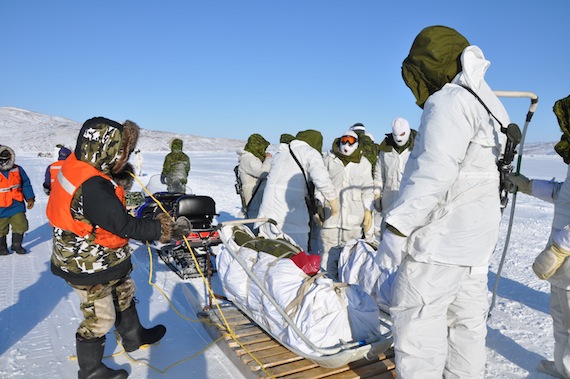 New neighbourhoods built on a solid, rocky plateau are in store for the Hudson Strait community of Salluit, whose future is complicated by warming land and air temperatures in the current town site. (FILE PHOTO)

People in Salluit now know what lies ahead for their community on the Hudson Strait, where some buildings have cracked and slipped due to melting permafrost.

Everyone who attended a public meeting last week in Salluit came away with better understanding of how their community can safely grow, said Michael Cameron, a town councillor and member of a committee overseeing a new land use and development plan for Salluit.

The good news is that a relocation of today’s town of 1,200— once considered an option— won’t be necessary.

Instead, the community’s future growth will be channelled into the South Plateau, an area of solid bedrock, which lies above the existing community in the direction of its airport.

Construction in these new areas on the South Plateau will allow Salluit to grow— and by 2026 its population may reach 2,200.

Retrofitting will be used to lessen problems in structures in the current town, which are built in a valley on unstable, ice-laden clay earth.

To avoid problems in the future, new construction techniques should also be used, says an April 2010 draft land use and development plan for Salluit, prepared by a consulting company, FoTenn urban planning and design of Otttawa.

Salluit will require as many as 300 new housing units to meet its needs and reduce the current level of overcrowding from 4.9 residents per household to four.

Some of this new housing, about 60 units, can be found from infill.

But this still means there will be a shortfall of 150 to 240 housing units depending on the growth of the community.

Five new satellite subdivisions above the community on the plateau to the south, with one reserved for industrial uses, will be able to accommodate this growth, says the 61-page plan and a shorter 18-page bilingual presentation obtained by the Nunatsiaq News.

Overall, tomorrow will also hold a new, sleeker look for Salluit’s architecture. Future housing designs will include two-storey row houses and duplexes, similar to those found in Iqaluit.

These will be built to both reduce the negative impacts of climate change and take advantage of the surrounding environment.

Thermosyphon pipes will be used around buildings to keep the ground cool. Site preparation will involve using less potentially unstable fill. There will be more pylons sunk into the bedrock and snowdrift studies so snow doesn’t bury the new structures. The buildings will also have low-impact lighting and be located to avoid winds and get the most benefit from the sun, not to mention the views over the land and community below.

The new neighbourhoods will have features like playgrounds and walking paths, which will, as shown in the draft plan, resemble those already found in Iqaluit. They’ll also need roads and other commercial or public buildings like stores, schools and child care centres.

While the residents of Salluit and experts agree that the development of the plateau area is necessary—there’s no price tag attached to this plan.

That’s the next step, said Cameron, who hopes that an estimate about how much it will cost to carry out the planned development will go to Quebec’s cabinet later this year. If approved, this would allow some work to start in 2011.

Cameron said he’d like to see the plans start to become reality within three to five years.

Concern over Salluit’s future has been mounting for more than 10 years, after slippages destabilized a neighbourhood of 20 new houses in 1998.

Salluit’s fire station also had to be taken down in 2006 and moved after its foundation cracked.

These structural problems are linked to a rise in soil temperature in Salluit, which has increased by 1 C over the past 10 years, while average air temperatures have risen by at least 3.3 C since 1990.

To find solutions, a technical committee was struck in 2007. Its members worked with scientific, technical and urban planning experts to make recommendations on:

• maintaining Salluit at its existing site, taking into account the warming climate;
• community land needs until 2026;
• identifying potential areas for development;
• foundation types for each type of soil;
• development principles and development guidelines; and,
• planning proposals for infill development in the existing town and for the new development areas.

A working group with representatives from Salluit’s Northern Village and the Landholding
Corp., as well as other community members, started meeting in February 2010 to provide input and feedback on technical committee’s analysis and suggested solutions.

They decided against the option of developing Tikiraatsiaq, a 300,000-square metre rocky promontory about two kilometres west of Salluit.

Studies showed Tikiraatsiaq had ample space for the community’s future growth, easy access to the coast and a partial road already in place.

But Tikitraatsiaq’s disadvantages included high winter winds up to 90 km an hour; many unexcavated archaeological remains; and the presence of possible pollution from a river that carries Salluit’s wastewater down to the sea.

To keep an eye on climate change and the ongoing development of Salluit, the Centre des etudes nordiques of Laval university also plans to open a small, year-round research station in the community this summer, which will be able to accommodate up to four researchers.