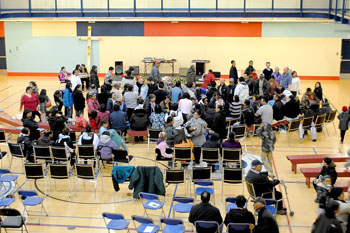 Kangiqsujuamiut gather at a June 11 service for the late Naalak Nappaaluk. (PHOTO BY SARAH ROGERS) 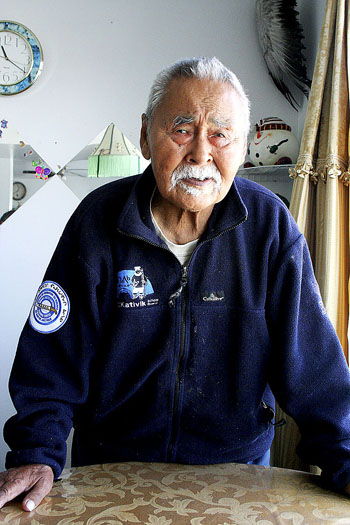 “They fall on one another as night falls,” he said. “They guide my way. I look for them.”

And now he has become one.

Nappaaluk, a well-respected elder and promoter of the Inuit language and culture, died June 8 in Kuujjuaq, where he had been a resident at the Tusaajiapik elders home.

Now Inuit in Nunavik say they’re mourning more than just a man, but also a great link to the past.

Through his stories, Nappaaluk, 81, brought a forgotten part of history to life for new generations of Inuit and newcomers to the region.

Nappaaluk worked closely with Nunavik’s Avataq Cultural Institute for decades to teach and preserve traditional Inuit activities. He also appeared and spoke in several films and documentaries on Inuit culture and played a leading role in the revival of the bowhead hunt to the region.

“Naalak was one of the few people who really had information on what life was like long ago,” said Charlie Arngak, the elder’s friend and president of Avataq. “And he shared that knowledge, not just to us in Kangiqsujuaq, but to the whole region. This is a huge loss.”

Arngak remembers the first time he came to realize what Nappaaluk had to share. Arngak was working as an audio technician for an Avataq meeting of elders in the 1980s.

There, Nappaaluk began storytelling, sharing an Inuit legend in which one person sings to another.

“It touched and impressed me,” Arngak said. “I really started to respect him then. He was like a foundation.”

From what is known of his past, Nappaaluk was born in the region near Kangiqsujuaq in 1928.

He was married to Mitiarjuk Nappaaluk, a respected elder, educator, author and recipient of the Order of Canada, who died in 2007.

Nappaaluk spent years advocating for the return of the bowhead whale hunt in Nunavik.

He was the only person still alive in Kangiqsujuaq to remember the hunts that took place in his youth.

When the hunt was finally revived in 2008, Nappaaluk was there at Akulivik bay to enjoy a freshly butchered piece of maktak. In an interview with Nunatsiaq News at the time, he said the moment was “overwhelming.”

Nappaaluk continued to help advise how the whale should be hunted, and butchered.

“If a bowhead doesn’t want to be hunted the skin will tense up and it’s impossible to hunt him. When he doesn’t mind being hunted you can go at him and cut him up easily. That’s how they are,” he said.

Inside, Mayor Mary Pilurtuut said she had seen Nappaaluk for the last time only the week before in Kuujjuaq.
Knowing it could be the last time she would see him, she held his hand and wished him well.

“It feels like a big piece of our community is gone now,” Pilurtuut said. “He will be greatly missed.”

Rooted in the past, Nappaaluk continued to share his knowledge through the films he appeared in.
His stories, perspectives and words of guidance came across as poetic, but his words were often heartfelt and urgent because he didn’t want the Inuit way of life forgotten, especially among his great-grandchildren’s generation.

In the short film If the Weather Permits, Nappaaluk tells director Elisapie Isaac his fears of a growing gap between young and old.

“We must find a way for the future generations to hold on,” he said.