Sabina revs up plan for fly-in Nunavut gold mine 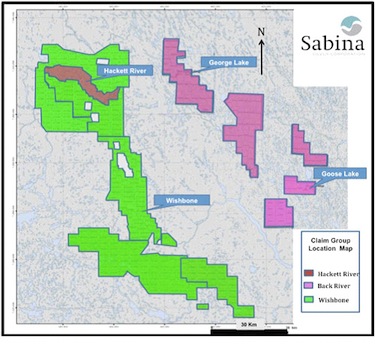 Sabina Gold and Silver Corp. wants to develop two properties which are rich in previous metals and minerals. The closest communities to these projects include Bathurst Inlet, located about 100 km north of the sites, Bay Chimo, about 190 km northeast, Kugluktuk, about 360 km northwest, and Cambridge Bay, about 380 km northeast.

A new gold mine project south of Kugluktuk and Cambridge Bay promises to deliver at least 200 jobs for workers around the Kitikmeot region — perhaps as early as 2014.

Although all the final results from this year’s exploration aren’t in yet, gold deposits around the Back River site’s George and Goose lakes, about 100 kilometres south of Bathurst Inlet, look extremely promising, said Pete Manojlovic, the director of exploration for Sabina Gold and Silver Corp.

The mining company sunk more than $30 million this year into exploration at its Back River properties and into the silver and zinc-rich deposits at its neighbouring Hackett River property.

Exploration at new deposits near Goose Lake produced “very exciting results and that’s been sparking the most interest in the company right now,” Manojlovic said.

The price of gold, now reaching record highs, is “the biggest driver” behind Sabina’s interest in pushing a mine at Goose Lake quickly into production, he said.

An Oct. 14 news release said that together the George and Goose Lake deposits could produce more than two million ounces of gold— and, with gold trading at more than $1,300 an ounce, this means the Back River gold mine could be expected to produce several billion dollars worth of gold.

Sabina now plans to develop its Back River project up to the same level as Hackett River.

According to a 2009 preliminary economic assessment, Hackett River was to go into environmental review in 2013, with a projected start-up date of 2017.

The project at Back River, because it would require much less infrastructure, could move ahead as early as 2014.

A plus for Back River is that, once its mine is in production, its gold bars will be easy to ship out by air, while ore from Hackett River would need to be shipped out.

Hackett River’s deposits, which also contain lots of marketable zinc, lead and copper, could keep open-pit and underground mines and up to 300 workers busy for at least 16 years.

But more than a billion dollars in capital investment would be required to get Hackett River off the ground, according to the economic assessment.

To support its mining and milling operations and deliver products to North Atlantic and Asian smelters, Sabina would have to build a 96-km all‐season road and a port, so ice-class vessels could pick up the ore concentrate and return with supplies.

Sabina pinned its hopes on the development of the Bathurst Inlet Port and Road facility, known as BIPAR, to help provide this port with supplies and infrastructure and lower the capital costs for Hackett River.

The $270-plus million BIPAR project, talked about for years, would include the construction of a dock and a 211-km road to Conwoyto Lake that would pass about 100 km from the proposed Hackett River mine site.

When Zinifex, the former owners of the Izok and High Lake project, bowed out of the BIPAR three years ago, the decision came as a blow to Sabina.

But now China Minmetals, the new owners of the Izok and High Lake project, are interested in building BIPAR — or something similar, with or without government help, sources told Nunatsiaq News.

Sabina is also looking for a partner to develop Hackett River, which could be an ideal mine project for the Nunavut Resources Corp. that KIA has set up to become a full-fledged Inuit partner in mining ventures.

Even with the large capital and high operating costs involved— what the 2009 assessment calls the “Arctic factor,” Hackett River still has “robust economics” and can make money, the study concluded.

Last month Sabina brought the KIA board out to Goose Lake and Hackett River. There they signed an $80,0000 contribution agreement with KIA to help with the Naoanayaoit traditional knowledge project database.

As Sabina’s two mines plow ahead, Inuit organizations can look to more windfalls: in addition to the future Inuit impact and benefits agreement and water compensation agreement with the KIA as compensation for possible environmental damages and social upheavals, the Nunavut land claims agreement permits Nunavut Tunngavik Inc. to collect a royalty from mining on some subsurface Inuit-owned lands.

This royalty is 12 per cent of net profits, with a minimum royalty of 1.8 per cent of gross revenues while the mine is in production.

Sabina’s two properties lie on a mix of Inuit-owned and crown lands.