Earth’s protective layer down by half, scientists say 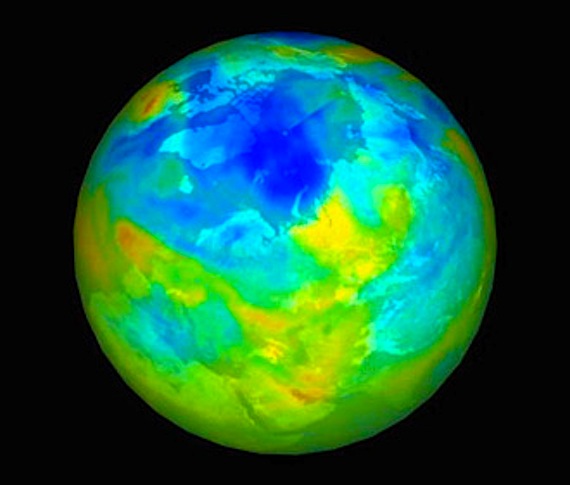 This image shows how large the Arctic ozone hole, shown here in blue, was in 2006. This year’s ozone hole will be at least as large, scientists predict. (IMAGE/NASA)

Make sure you slap on lots of sunscreen this spring, because there’s a growing hole in the protective layer which keeps harmful rays of ultraviolet light from reaching the surface of the earth.

The ozone layer, which wraps around the planet like a blanket, about 20 kilometres above the surface, filters out these ultraviolet rays.

But there’s only about half the ozone there should be above the Arctic, say European scientists.

“Our measurements show that at the relevant altitudes about half of the ozone that was present above the Arctic has been destroyed over the past weeks,” said institute researcher Markus Rex, describing the current situation in a March 14 news release from Germany’s Alfred Wegener Institute for polar and marine research.

“Since the conditions leading to this unusually rapid ozone depletion continue to prevail, we expect further depletion to occur.”

With unusually low temperatures in upper atmosphere spurring on the massive depletion of ozone, the Arctic appears to be heading for a record loss of ozone, scientists say.

This loss can be damaging to animals and plants because ultraviolet rays are believed to cause skin cancer and cataracts.

They can also disrupt the reproduction of some animals and destroy plant life. Research also has determined that whales can suffer from sunburn due to too much exposure to ultraviolet rays.

The ozone hole should be shrinking, thanks to the Montreal protocol, signed in 1989.

In this agreement, nations said they would phase out and ban chemicals such as chlorofluorocarbons, or CFCs, found, among other things, in aerosols, which contribute to ozone destruction.

But scientists now point to another connection between ozone loss and global warming.

That’s because heat-trapping greenhouse gases — which are still rising — keep warmth next to the earth’s surface.