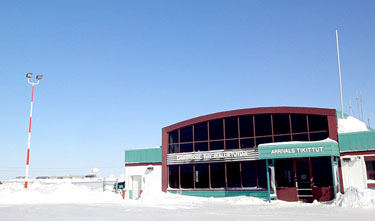 The Cambridge Bay airport needs more than $30 million of work, but that’s just a small part of the improvements to transportation infrastructure that the Kitikmeot needs. (PHOTO BY JANE GEORGE)

Here’s a graph from the NWT-Nunavut Chamber of Mines which shows the years when eight major mine projects in the Kitikmeot region are expected to come into production. (IMAGE/NWT-NU CHAMBER OF MINES) 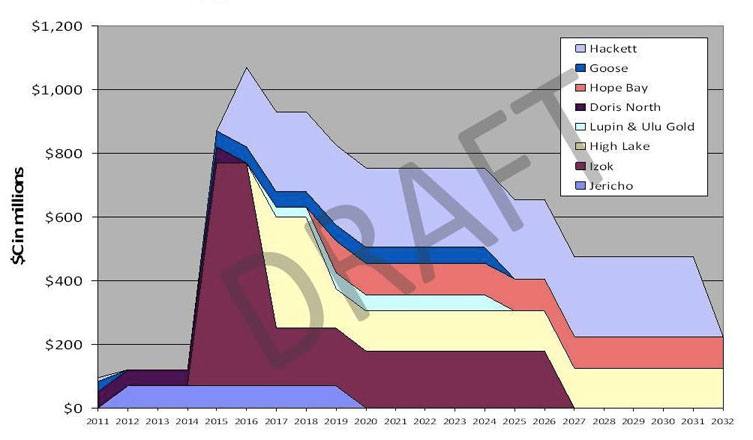 Eight mining projects in the Kitikmeot have the capacity to generate billions of dollars in the region, shows this graph from the NWT/Nunavut Chamber of Mines. (IMAGE/NWT-NU CHAMBER OF MINES) 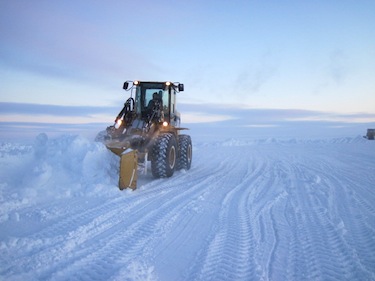 Clearing a landing strip on the ice nearby the Hackett River exploration site is no easy task. (PHOTO COURTESY OF SABINA)

But if their efforts hadn’t worked, aircraft wouldn’t have been able to fuel up there during one of the busiest weeks of the winter, when delegates, along with their booths and other cargo, were travelling into Cambridge Bay to attend the Kitikmeot Trade Show.

The precarious state of airport services— particularly in the hub airport of Cambridge Bay— is just one of the many transportation hurdles which the Kitikmeot region must overcome if the region wants to take advantage of the economic boom ahead, said presenters at a trade show session on transportation and infrastructure.

Between 2012 and 2017 eight mines— Jericho, Izok, High Lake, Lupin and Ulu Gold, Hope Bay, Goose and Hackett— may come into production in the Kitikmeot, said Tom Hoefer, executive director of the Northwest Territories and Nunavut Chamber of Mines.

In 2011, Newmont is looking to invest $300 million into ramping up its Hope Bay gold mine and plans to ship up its mill to the site in 2012.

And, as Hope Bay and the seven other mine projects come into production, they’re expected to generate in one billion dollars of business opportunities in 2016 alone and a total of 3,000 new jobs by 2019.

There should be “no losers, only winners” in this development scenario, which similarly fueled the Northwest Territories’ prosperity, Hoefer said.

But take full advantage of these mines, the Kitikmeot will need a solid transportation infrastructure.

Its airports are also already causing management headaches due to a lack of expertise. As security requirements and paperwork increase, it’s becoming harder to find qualified workers, said Ron Erlandson, the assistant director of Nunavut airports.

New observer and communicators now need to maintain an 80 per cent average in math and English. Of a Nunavut Arctic College class in Rankin Inlet, which started out with 10 students, only one or two are expected to graduate. Even maintenance workers must now be able to file papers and reports, Erlandson.

Finding qualified labour is just one the challenges.

Cambridge Bay’s cramped airport needs more room. The airport hosts 19,000 passengers annually, a figure that is expected to rise to 25,000 by 2020.

To fix that, a 2010 report prepared for the GN recommended doubling the terminal’s current size over the next decade.

Cambridge Bay is also the last airport in Canada with scheduled jet service to use a gravel runway, the report stated.

And the study called for the runway to be paved and extended within five years.

• improved gravel shoulders around the edge of the runway;
• and extended apron to relieve aircraft congestion;
• better lighting and landing systems;
• new lots for airside commercial development; and,
• realignment of the airport’s access road.

The cost of the short-term improvements was pegged at $34.4 million.

But the first chunk money, $10 million, is supposed go to shoring up the gravel sides of runway doesn’t conform to national standards.

The same shortfalls in transportation infrastructure— which also include a lack of roads and ports, affect mining exploration companies like Sabina Gold and Silver.

Its Hackett, Wishbone Goose deposits, where the company plans to spend $47 million in 2011, are loaded with silver, gold and precious metals, but even to do exploration like diamond drilling requires tonnes of salt, heavy equipment and other supplies.

Only small aircraft can land on a short ice runway on its Hackett River property, south of Bathurst Inlet— basically the only way to bring in supplies.

If it was transportation was less expensive, and easier, logistically, the properties would have been in mined in the 1980s, said Scott Burgess, the exploration manager at Hackett River.

“We face he same problems as the communities and the companies that operate at a different scale,” he said.

With the Bathurst port and road project now at a “stand-off,” according to a mining company manager at the trade fair, the NWT-Nunavut Chamber of Mines says there’s still a way for the Kitikmeot to get the infrastructure, which it needs for mining development— 600 kilometres of roads, three or four ports and back-up, like a chain of microwave telecommunication towers.

To this end, the group is calling for the creation of a “Kitikmeot Mineral Development Partnership,” bound by a cooperation agreement that will see top managers from industry, governments and Inuit organizations working together.

“By working together in a coordinated and cooperative approach early, we can make the most of mining development opportunities in the Kitikmeot,” the chamber’s Hoefer said.