”We felt better to see the land clean” 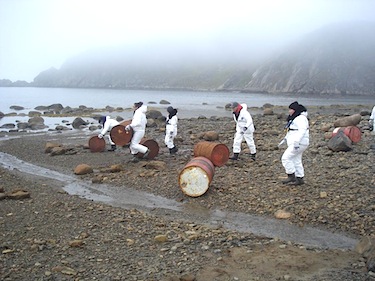 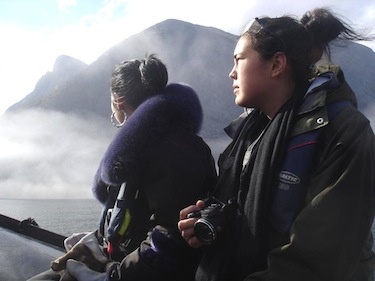 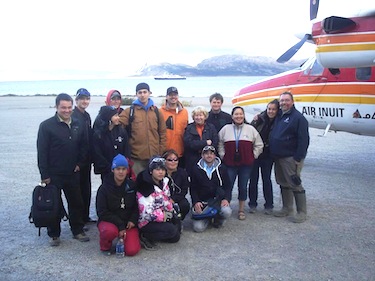 Students, teachers and Torngat park representatives at the Nain airport before their flight home to Kuujjuaq. (PHOTO BY XAVIER BEAUPRÉ)

Visible through the thick September mist, Kris Tukkiapik is suited up in white protective gear, rolling drum after rusted oil drum towards the shoreline.

Tukkiapik and nine other classmates from Kuujjuaq’s Jaanimmarik school are in Nachvak, a site along the rugged coast of Labrador’s Torngat Mountains National Park, just on the other side of Nunavik’s eastern border.

The students form a human chain as they roll rusty old fuel barrels to each other.

At the shoreline, they are loaded into zodiacs and brought to the larger vessel that will ship them to St. John’s, Newfoundland and Labrador’s capital.

The barrels and other debris have sat there for decades, left behind by hunters, outfitters and explorers — a black eye to the windswept beauty of the Torngats.

Most teenagers wouldn’t enjoy a week spent cleaning up garbage, but for this group of Kuujjuaq youth, it was the experience of a lifetime.

The group boarded a Cruise North ship last month to spend a week cleaning up park sites and exploring the land of their Inuit neighbours to the east.

“The first day we were cleaning up 103 drums,” Tukkiapik said. “It was all foggy, we had no idea where we were.

When the fog started to disappear, we could see the mountains all around us, it was really nice.”

As part of the program called “stewardship of the North,” Tukkiapik said he picked up all kinds of debris that week – old rifles, nails, even scraps from an old float plane crash.

Some oil drums even had fuel left in them and had to be carried upright, sometime 400 metres at a time.

“It was great at the beginning, but near the end of the day we were all tired and getting lazy,” Tukkiapik laughed. “But we felt a lot better to see the land clean.”

At the end of the six-day trip, the group had cleared out 27 tonnes of debris from the park.

In between clean-ups, the group had time to hike in the Torngats, view wildlife and visit with Inuit elders.

On board their ship, students met with Parks Canada co-management boards, an archaeologist and other wildlife scientists.

The group also visited the site of Hebron, an Inuit community that was shut down by the government in the 1950s. A memorial plaque reads the names of the Inuit who once lived there — many of the visiting students shared the same family names.

In fact, Tukkiapik said he felt like he was still standing on his own land during his visit to the region, known as Nunatsiavut.

Tukkiapik’s teacher, Xavier Beaupré, who accompanied the group, was also struck by how much the two regions had in common.

“An elder there told them that there wasn’t always a border between Quebec and Labrador (Newfoundland),” Beaupré said. “People from Kangiqsualujjuaq crossed the Torngats to hunt and meet with family and friends in that region.

But Beeper’s students noticed one difference. Once in Labrador, the group heard much less Inuktitut, although most elders spoke a dialect that the Inuit youth could understand.

In its second year running, the stewardship program succeeded in forcing students to ask questions about their land and culture and how politics can impact them.

In journals kept during the trip, Beaupré said students asked questions about how the junk got to the park in the first place; did explorers have the right to dump there, let alone visit those sites in the first place?

The cleanup also triggered questions about waste disposal in the north and how to promote recycling programs, he said.

“The trip was to make them more conscious of the land they live on and to help change their habits,” Beaupré said. “It’s so common to see beer and pop cans all over the place at home.

“If they can go to a national park and clean up protected sites there, I don’t think they’ll be able to throw waste on the ground after that.”

“I’m going to try and keep the land clean,” he said. “I’m also going to watch more closely how the land reacts to climate change and how animals move. I think about it differently now.”