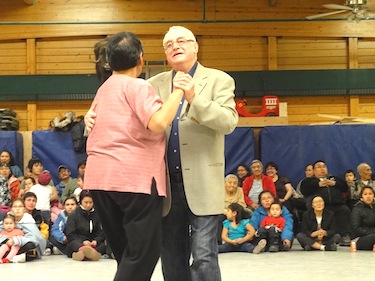 Bill Davidson, the long-time and founder manager of the Larga Edmonton patient boarding home, takes Mona Tiktalek of Kugluktuk on to the floor Oct. 5 for a farewell waltz at Cambridge’s Bay Luke Novoligak community centre. (PHOTO BY JANE GEORGE) 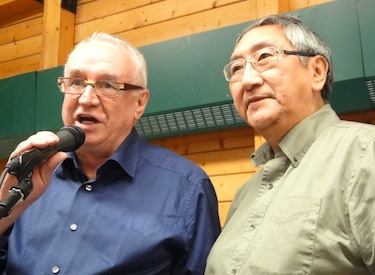 Bill Davidson, who retires at the end of this month as manager of the Larga Edmonton patient boarding home, (seen here with Kitikmeot Inuit Association president Charlie Evalik) says goodbye to people in Cambridge Bay Oct. 5. Davidson received a standing ovation and a plaque from the KIA. (PHOTO BY JANE GEORGE)

A man familiar to nearly everyone from western Nunavut heads on to a new life Oct. 31.

Bill Davidson, 67, the long-time and founder manager of the Larga Edmonton patient boarding home, is retiring.

With his heavy Scots accent and warm ways, Davidson made lasting friendships with thousands of Nunavummiut from the Kitikmeot region who passed through his patient boarding home during the nearly 24 years he managed the facility.

“Most of the people were more than just patients — they became very close friends,” Davidson said in a recent interview from Edmonton.

That closeness was evident when Davidson made an appearance at Cambridge Bay’s Luke Novoligak community Centre Oct. 5.

To kick off the evening entertainment organized by the Kitikmeot Inuit Association, Davidson took to the dance floor with Mona Tiktalek and they waltzed to fiddler Colin Adjun’s tunes.

KIA president Charlie Evalik also presented Davidson with a commemorative plaque, thanking Davidson for his years of work on behalf of Kitikmeot Inuit and others in the North.

Without Davidson, the North might have never seen patient boarding homes at all.

That’s because Davidson, who jokingly calls himself “the grandfather of Larga homes,” came up with the idea of starting a patient home in Edmonton back in 1986.

At that time, if patients from western part of what was then the Northwest Territories needed specialized medical treatment, they flew to Edmonton, where they were met by a cab and taken to the Bonaventure Hotel.

Davidson, who managed patient travel from Inuvik, heard a disturbing story about a man who had traveled to Edmonton from a remote settlement.

The man was given his key and pointed in the direction of the elevator.

He entered the elevator and, as soon as the door closed, he rolled up his jacket and went to sleep, Davidson recalls.

Someone eventually woke the sleeping man up — the man said he thought he was in his bedroom because the elevator door had closed.

“I said, good grief! These people are coming out of these communities and they’re being left to the elements of the cities,” Davidson said. “That gave me the first idea of opening up a boarding home in Edmonton.”

Larga Edmonton remains the only one of the Larga patient homes that takes in Inuit from Nunavut as well as First Nations and non-status residents of the Northwest Territories.

Larga Edmonton looks after transportation, lodging and meals — and the Northern Health Services Network looks after everything else.

Everyone who stays at the facility gets along well together, because, as Davidson put it, “northerners are northerners.”

Within the walls of Larga Edmonton everyone is family. And to pass the time there are excursions, entertainment and meals that include country foods.

“People are not just thrown to the wolves as they were in the old days,” Davidson said.

For the past 23 years, Davidson has greeted one and all to Larga Edmonton, warning them about the big city.

“It can be an ugly city,” he tells them. “People are not as kind as they are in the communities.”

Davidson first came to the North as a miner and then worked for NTCL as the first manager of the Iglu Hotel in Baker Lake, where he spent four years.

In 1981, Davidson, who was by then living in Edmonton, kicked his dependence on alcohol, became sober and then went to work in Inuvik.

Since his first work with the Inuvialuit there, Davidson said he’s seen enormous progress in health care delivery.

In the past, poor communications and long travel times hampered patient treatment, he said.

And there was less awareness of illness — often by the time people showed up at the nursing station it was too late for any treatment.

Now there are more people from the North coming to Edmonton, people are becoming much more aware of illnesses and these are being caught much earlier when they’re curable.

Today’s north has “ a great health care system,” he said.

“People from Nunavut can get seen quicker in Edmonton than I can living in Edmonton,” Davidson said.

When asked about his fondest memory of Larga Edmonton, Davidson said it hard to come up one story because the years were full of many rich moments.

“When people come in now and say ‘Hi Bill,’ whom I’ve known for 23 years, and they come in with their children, it makes me feel we’ve been going ahead together for a long time,” he said. “I have nothing but love for the North and northern people. When you give to them, they give to you as well.”

To honour Davidson’s long service to the North, all Larga patient boarding home managers and many others came to a gala retirement party last month in Edmonton.

Leaving his second family at Larga Edmonton on Oct. 31 will be sad, Davidson said, but after a cross-country drive to Nova Scotia, he still plans to be around in one way or another.

“The North is in me and will never leave me,” he said.