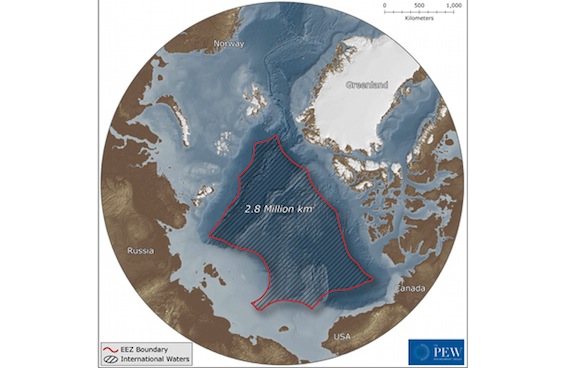 This map shows the 2.8-million-sq.-km area in the central Arctic Ocean that lies beyond the Exclusive Economic Zone of the five polar nations with Arctic Ocean coastlines: Canada, Russia, Norway, the U.S. (Alaska) and Denmark (Greenland). In an era of retreating Arctic sea ice. (PHOTO/ PEW ENVIRONMENT GROUP)

A leading North American environmental group stepped up its push this week for an international moratorium on commercial fishing in the central Arctic Ocean.

In an appeal to countries around the world — but particularly to Canada and the four other Arctic coastal nations — the U.S.-based Pew Environment Group and its Nunavut offshoot Oceans North Canada are warning that retreating sea ice could trigger a potentially destructive fishing industry in international Arctic waters.

The group, which wants a “precautionary” global treaty signed to pre-empt overfishing and to ensure science-based management of any central Arctic Ocean fish resources, took its message to the International Marine Conservation Congress this week in Victoria, B.C..

The area in question lies beyond the 370-kilometre, near-shore “exclusive economic zone” within which each Arctic coastal country — Canada, the U.S. (Alaska), Russia, Norway and Denmark (Greenland) — has acknowledged fishing rights.

Even within the close-to-the-coast, Beaufort Sea zones of the U.S. and Canada, a lack of scientific knowledge about the size of fish stocks has prompted bans on commercial fisheries.

But out toward the middle of the Arctic Ocean, where thick, multi-year sea ice seemed a permanent fixture on the water until recent years, even less is known about resident fish populations.

Much of the vast, 2.8-million-square-kilometre area of international waters at the centre of the Arctic Ocean — dubbed the Arctic “doughnut hole” by the conservation advocates — could experience ice-free summers in the coming years or decades, according to many scientists.

And while little research has been done in the remote and harsh region, experts believe significant volumes of commercially valuable fish such as Arctic cod or turbot would attract fishing fleets from many nations — including China — if ice-melt projections prove accurate.

Pew’s Arctic science director Henry Huntington, who took part in a conference panel on Arctic fishing May 17 with Canadian and U.S. officials, told Postmedia News that while no one is proposing to post a permanent “no fishing” sign in the central Arctic, countries need to gather “sufficient information to justify” any future fish-harvest plans.

“We just don’t know much about the biology of the deep-sea area,” said Huntington. “Most of the studies have been around the margins. And it’s perilous to extrapolate too far.”

At the same time, however, without the creation of a treaty or some form of international agreement to protect fish populations until more is known about their size, there’s little to prevent countries from exploiting the uncertain resources available.

Pew points to what happened in the 1980s in the Bering Sea as a cautionary tale. The group says “unregulated fishing by Poland, South Korea, Japan and other countries in the international waters of the Bering Sea severely undermined pollock stocks in just a few years.”

Eventually, a conservation agreement was struck, but “the damage was done and the area remains closed to fishing today,” Pew states.

Huntington says that’s the kind of scenario that could unfold in the central Arctic Ocean if countries don’t work together now to pre-empt overfishing if and when the ice retreat opens the possibility of a commercial harvest.

“Wherever anybody wants to motor from to get up there can start fishing if they so choose, because it’s international waters,” Huntington said. “Not a whole lot is known about the habits of those species or where they might be in those waters, so it’s a little bit of speculation. But I think if somebody really thought there was a huge aggregation of marketable fish up there, we would probably see a trawler heading that way.”