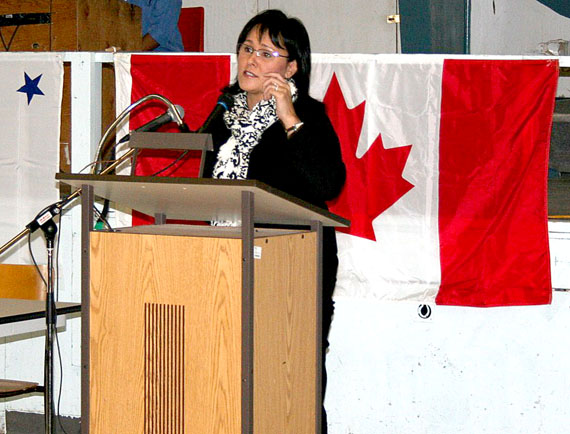 On her whirlwind trip through Nunavut last week, Leona Aglukkaq, Nunavut’s MP — who’s also the federal minister of health and the minister responsible for the North, zipped through the territory, glad-handing with constituents from the Kitikmeot to the Baffin region and making good news announcements in several communities.

Aglukkaq’s tour began in Gjoa Haven. From there, despite fog that grounded flights to Rankin Inlet for days, she arrived in time to join Mayor John Hickes for a community tour and a meeting with the hamlet council.

Also in Rankin Inlet, Aglukkaq and Lorne Kusugak, Nunavut’s minister of community and government services and MLA for Rankin Inlet South-Whale Cove, announced July 8 that a new water pressure booster system and waste water treatment projects in the community will receive $10.9 million from Canada and Nunavut.

Then, heading off to Pangnirtung, Aglukkaq toured this community, visiting its new health centre and meeting with the hamlet council.

Due to poor weather conditions, Aglukkaq had to cancel her planned visit to Kimmirut.

Aglukkaq wrapped up her tour in Iqaluit on July 14 by giving $600,000 over three years to Actua’s science, engineering and technology skills workshops in the three territories.

This week, Aglukkaq and Dr. David Butler-Jones, her chief public health officer of Canada, participates in the international AIDS 2010 conference in Vienna, Austria.