A flicker of hope for Nunavut’s mothballed diamond mine 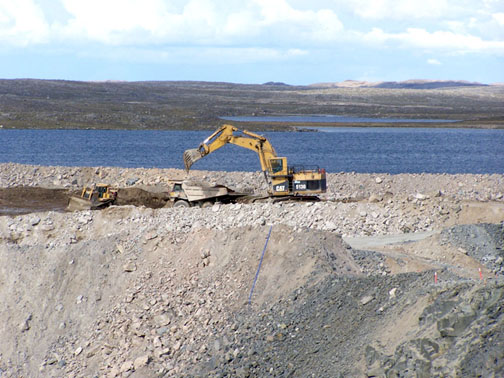 A loader at work at the Jericho diamond mine site in 2006. The mine, shut down in 2008 after less than two years of operation, has a new owner in Shear Minerals of Edmonton. (FILE PHOTO)

Nunavut’s mothballed Jericho diamond mine has a new owner.

Edmonton-based Shear Minerals announced July 19 it is buying the mine, located around 400 kilometres southwest of Cambridge Bay, for about $3.6 million worth of Shear stock and $2 million in cash.

Pamela Strand, Shear’s president and CEO, chuckles at the suggestion that her company got a bargain for a diamond mine that cost $200 million to build.

“That’s exactly why we are very excited about the opportunity,” Strand said in a telephone interview. “This is an asset that has had quite a bit of history and we need to go in there with a business plan that will make it more profitable than it has been in the past.”

Strand is not promising to reopen the mine, at least not right away. Instead, Shear will embark on a two-year project to expand the resource base at and around Jericho.

She said there’s been no exploration below 240 metres at Jericho, and there are also other potential diamond deposits nearby.

But Strand said Shear’s success finding kimberlite pipes at its Churchill site near Rankin Inlet shows the company is taking a worthwhile risk with Jericho.

“We can find these things,” she said. “So we believe we can prove something up here.”

Under the deal with the mine’s creditor, CAZ Petroleum Inc., Shear also picks up stakes in several other mining projects, including 50 per cent of the nearby Polar property in a partnership with diamond giant DeBeers Canada, and a 75 per cent stake in the Rockinghorse property, co-owned by RioTinto Canada.

In return, CAZ Petroleum gets the cash, 72 million shares of Shear stock and a two-per cent royalty on all diamonds and minerals from the Jericho mine.

Jericho opened in 2006 to great fanfare as Nunavut first diamond mine. It was the only operating mine in Nunavut until it closed in 2008. Former owner Tahera Diamond Corp. spent more than $200 million on startup costs, then lost millions on the project.

Tahera lost $143 million in the first three quarters of 2007 alone. The company later went into bankruptcy protection and was delisted from the Toronto stock exchange.

The Jericho closure also resulted in the loss of 160 jobs for Inuit in the Kitikmeot region, both from the mine itself and from the local contractors who served it.

Eric Prosh, the director of minerals and petroleum resources at the Department of Economic Development and Transportation, said the territorial government’s reaction to the news is “positive and cautious.”

“Shear Minerals has a solid and credible track record in diamond exploration in Nunavut,” Prosh said in a prepared statement.

“We will be most interested to see the details of their plans for Jericho as they emerge, particularly concerning efforts to upgrade the resource potential of the area kimberlites, and the economics of Jericho as a whole.”

The buyout still needs approval before it’s final. Shear Minerals also needs to raise $10 million in equity financing for the deal to go through.

Any new work is also subject to approval by the Kitikmeot Inuit Association, the Nunavut Impact Review Board and Indian and Northern Affairs Canada.

If all that happens, Strand said Shear hopes to start work at Jericho this year.