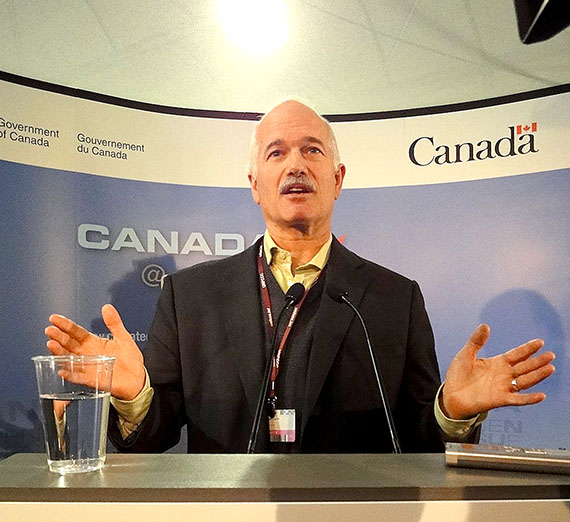 Federal NDP leader Jack Layton took over the podium at the Canadian delegation briefing room in Copenhagen’s Bella Centre Dec. 17, following a press briefing by Environment Minister Jim Prentice on the progress of negotiations at the United Nations climate change conference. Prentice did not respond to a request from Nunatsiaq News for permission to ask a question. But NDP leader Jack Layton did provide an answer to a question on whether a two-degree Celsius limit on global temperatures by 2100 — the goal that most world leaders are trying to achieve — is acceptable to Canada, since Arctic temperatures may rise by up to 9 C or more by 2100. He said the world’s governments are still “so far away from a global action plan” on cutting climate-warming greenhouse gas emissions, it will be hard to limit global warming to even a two-degree rise. (PHOTO BY JANE GEORGE)