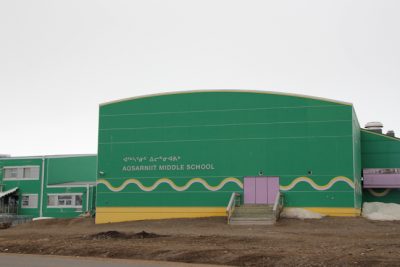 A team of nurses will be at Aqsarniit Middle School Sept. 13-17 to offer vaccines to students aged 12 to 17. (File photo)

Two of the cases are people at Aqsarniit Middle School, he also announced in a separate tweet Saturday morning. He did not specify whether they are students or staff. Government officials are contacting parents, students and staff who have been identified through contact tracing, Savikataaq said.

Saturday’s three new cases are among people who were not vaccinated, Savikataaq wrote on Twitter. All of the new cases are in Iqaluit, he added. Iqaluit has been dealing with an outbreak of COVID-19 for nearly two months after the city’s first-ever case was confirmed on April 14.

“Let’s stay calm and on course as we manage these cases,” he wrote.

It was the second day in a row that Nunavut’s case count increased. Four new cases were reported Friday. The premier called that increase “concerning” and predicted “we’ll see more cases in the coming days too.”

On June 4, there were 10 cases but, after a stretch of days with recoveries combined with no new cases to add, the count fell to a single case on Monday.

Government officials are scheduled to provide an update on the COVID-19 situation on Monday morning at the legislative assembly.

Correction: This story has been corrected from a previous version to correct the spelling of the school’s name.