“I think I have the best job in Nunavut.” 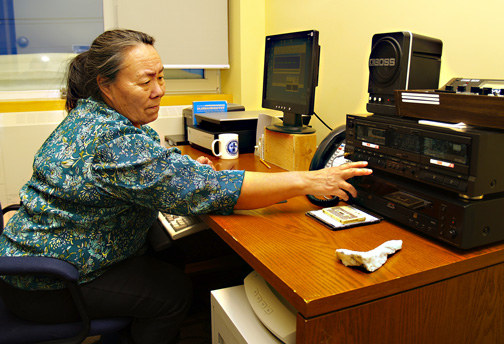 Leah Otak of the Igloolik Research Centre’s oral history project digitizes one of the hundreds of taped interviews conducted with Igloolik elders as far back as 1986. The tapes contain a huge store of vanishing traditional knowledge and language. (PHOTO BY CHRIS WINDEYER)

IGLOOLIK — In the corner of a quiet government office building, Leah Otak spends her work days in front of a computer and a cassette deck, poring over hundreds of hours of recorded interviews dating back as far as 1986.

The interviews contain a massive trove of quickly-disappearing information: the traditional knowledge of elders from the Igloolik area covering everything from shamanism and kinship to traditional navigation methods and hunting and sewing techniques.

“It’s not boring,” Otak says. “I think I have the best job in Nunavut.”

Otak, manager of Inuit Qaujimajatuqangiit and oral history research at the Igloolik Research Centre, and assistant William Qamukaq are organizing the interviews by subject, with the long-term goal of getting the information into books and learning materials.

The process is vital to preserve traditional knowledge that’s threatened by everything from social ills and modern — mostly English — media to the universal tendency of young people to shun advice from their parents and elders. And while the advent of southern-style education brought new kinds of learning to Nunavut, it also disrupted traditional ways of passing along knowledge.

“It was the elders who had the desire to pass on the knowledge that they noticed is not being carried on,” Otak says. “When kids started going to school they didn’t spend time with their parents anymore, didn’t go hunting anymore, so all of the knowledge was being lost.”

The knowledge is also subject to the ravages of time itself. Of the 31 elders who contributed to the project, only two are still alive and are now in their 70s and 80s, Otak says.
But the wisdom is preserved on tape and in the process of being digitized, a process that should be finished this spring.

It’s also a vital source of Inuktitut vocabulary, preserving words and ideas that have faded from regular use. Plans call for a dictionary, and Otak hopes to see more classroom materials, with a simplified vocabulary for younger students and a more traditional form of Inuktitut for high school.

“I don’t think we’ll ever speak this language again, because we’re already speaking a translated version of English, rather than a real Inuktitut language,” Otak says.

“But we could take some words back. If people became interested in learning about how we speak, it [Inuktitut] will be presereved.”

Otak recalls on-the-land programs that sent youth out with elders who shared traditional knowledge. There need to be more programs that offer the benefits of that kind of connection, she says. “You could tell they [youth] were happier.”

Still, Otak admits there’s something strange about all the talk of the importance of preserving Inuit culture. “Thirty years ago we didn’t talk about getting back our ways because we knew them, we lived them,” she says.

So much knowledge has already been lost, but in her job Otak finds a reason for optimism. The knowledge that’s been saved is here to stay.