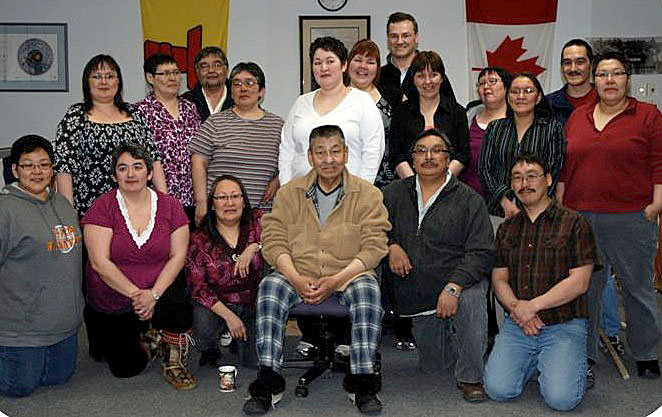 The Kitikmeot Inuit Association staff members are mourning the loss of the organization’s long-time executive director, Fred Elias— shown here sitting in the middle of the front row with the KIA staff— who died July 17 of cancer. (PHOTO COURTESY OF THE KIA)

The Kitikmeot Inuit Association staff and executives are in mourning the loss of Fred R. Elias, the organization’s long-time executive director, who died of cancer on July 17.

“It is a hard thing to accept but we know that he would want each of us to carry on the work that is laid out before us for the benefit of the Kitikmeot and Nunavut Inuit,” said a July 20 statement from the KIA.

“It is no doubt Fred’s vision and advice is embedded in the strategic, business and management plans of each Kitikmeot organization, if not NTI and Nunavut.”

Elias, originally from Tukoyaktuk, was born Nov. 18, 1946. He worked more than 16 years at the KIA in Cambridge Bay and, before that, as a businessman in Kugluktuk.

“We honour and pay tribute to him and his family for the personal sacrifices he had made throughout the years that he served as the executive director for the Kitikmeot Inuit Association,” the KIA’s statement said.