In Mohawk territory, a memorial for Inuit who died far from home

Church unveils monument to “our Inuit brothers and sisters” 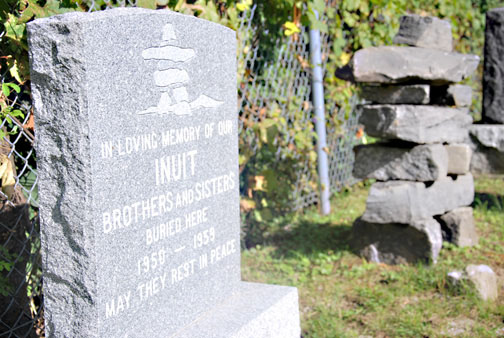 This monument in Kahnawake, QC pays tribute to 15 Inuit who died after leaving the North for Montreal. Members of the Mohawk community’s United Church unveiled the monument during a ceremony Sept. 10. (PHOTO BY JORDAN STANDUP)

KAHNAWAKE — For years their graves went unnoticed and were eventually forgotten.

But thanks to the efforts of the United Church in this Mohawk reserve just south of Montreal, 15 Inuit buried in the community’s Protestant cemetery during the 1950s will be remembered forever.

Nearly 30 residents of Kahnawake gathered in the cemetery Sept. 10 to honour the Inuit from seven different communities who were buried far from home.

“In loving memory of our Inuit brothers and sisters buried here 1950-1959. May they rest in peace,” the monument, which is about the size of an average tombstone, reads.

Beside the monument stands an inukshuk created by Kahnawake resident Robert Patton.

“It’s our way of remembering the people who were buried there over the past year,” Scott Kabwe said.

“This year, the honouring and remembrance of the Inuit was a very nice addition. When we realized that so many people were buried here, and forgotten really, the idea of a monument came about and our congregation agreed to do it,” she said.

She also pointed out that the monument is an excellent way to clearly mark the once hidden graves.

“The graves were quite hidden and they’re not marked very well. So we thought if we could mark out the area where they had been buried originally and put up the monument, it would be a special place to remember them,” Scott Kabwe said.

The service began with special songs and prayers for “our Inuit brothers and sisters.”

“I explained the background of what happened and then dedicated the monument to the Inuit,” Scott Kabwe said.

Due to space constraints, the monument does not include the name of all those who are buried there.

Dorris Montour, who has been a member of the United Church since 1925, read the names of each person buried there and described the moment and service as “a very moving experience.”

No home community was indicated for Eelookootak.

The youngest was just two months old and the oldest was 74 years old.

“Some of the people buried there were just babies and it really is so sad,” Montour said. “But I’m glad that we can now always remember each and every one of them.”

Before the monument was unveiled, Scott Kabwe was busy going through whatever information she could find about the 15 Inuit. She learned that many of them had died from tuberculosis.

Most were travelling to Montreal to be treated for different illnesses and some died while making the trip between 1950 and 1959.
Scott Kabwe said it would be nice for Kahnawake to learn more about who these people were.

“We have talked about a follow up to this by sending a photograph of the monument along with a brief description of what we did to each of their home communities,” she said. “It might answer some questions for them because they might not know what ever happened to them.”

Scott Kabwe was glad to have taken part in the special dedication and called it a learning experience.

“This is part of everybody’s learning, it’s quite amazing because it keeps expanding and expanding. I’ve certainly learned a lot from this and I think others have too.”

She is excited about the idea of establishing contacts between Kahnawake and the seven Inuit communities.

“We could possibly learn even more about these people and create relationships,” Scott Kabwe said.