Okalik tears into Nunavut government ahead of leadership review 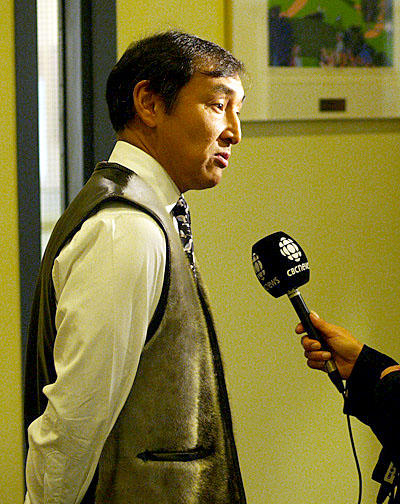 Iqaluit West MLA Paul Okalik speaks to a reporter outside Nunavut’s Legislative Assembly Oct. 20. Okalik launched a blistering attack on the record of Premier Eva Aariak’s government on the second day of the current assembly session. (PHOTO BY CHRIS WINDEYER)

Iqaluit West MLA Paul Okalik lobbed a big, loud bomb at the government of Premier Eva Aariak Oct. 20, slamming the government’s record and accusing the premier of claiming some of his work as her own.

Okalik, who served as premier from 1999 to 2008, said a list of accomplishments, issued by the government in September, included projects that started while he was still in power.

“I must confess that in reading this list of accomplishments was in some ways a pleasant trip down memory lane,” Okalik said in a reply to the opening address, a legislative procedure rarely seen during the middle of an assembly session.

Okalik went on to accuse the government of failing to stand up to the European Union’s seal product import ban and “abandoning our allies” in Newfoundland in their rejection of a free-trade deal with the EU in response to the ban.

“Sadly, Mr. Speaker, it appears clear to me that this current government’s definition of taking action is to cut a check to someone else to fight our battles,” he said. “Perhaps there is fear that if we speak up on behalf of Nunavummiut, we’ll stop being invited to nice receptions and ceremonies.”

He went on to accuse the government of:

• supporting the unpopular seismic testing proposal near Pond Inlet this past summer that was stopped by a Qikiqtani Inuit Association lawsuit;

• failing to increase levels of Inuit employment within the Government of Nunavut;

• refusing to fund a second round of the Akitsiraq law program while earmarking millions to pay for an “utterly redundant” government liason officers.

As stunned MLAs looked on, Okalik sarcastically praised the government for its “strong, unwavering support for the consulting industry” while failing to solve Nunavut’s numerous social programs.

In what sounded like the launch of a political campaign, Okalik said he lacks confidence in the government and questioned whether it’s headed in the right direction.

Speaking to reporters after Okalik’s remarks, Aariak said Okalik had nine years to tackle the problems he complained about and failed to take action.

“We inherited a lot of things that we are fixing right now,” she said. “And I found it very interesting that he never once mentioned the Nunavut Housing Trust fiasco that happened at his watch.”

That trust, set up in 2006 when Okalik was still premier, went $60 million over its $200 million budget. That’s draining money from other programs, Aariak said.

“We inherited a lot of mess in that, and we are fixing it,” Aariak said.

Regular MLAs have vowed to hold a leadership review after the current assembly session wraps up, raising the possibility that current cabinet ministers, including the premier, could be removed from their jobs. Aariak said she’s not worried about that.

“If that’s what they (regular MLAs) want to do then let them do it, because we’re doing hard work trying to accomplish our mandate,” she said.

For his part, Okalik told reporters he’s not engineering any comeback attempt, despite repeating several times the slogan-like phrase “we can do better” during an interview.

“It’s not up to me, it’s up to my colleagues to make those decisions,” he said. “I hope that the good people of Nunavut will understand that we can do better.”

Asked why he chose to make his remarks in a reply to the opening address, Okalik said: “Have you seen question period lately? So, I rest my case. We can’t really get replies.”

“All I can do is present my side of the story.”